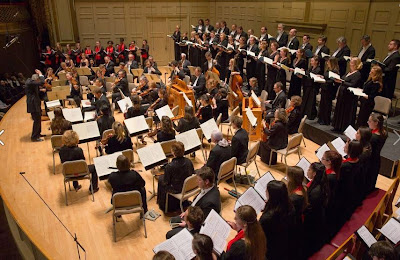 The Handel and Haydn Society celebrated its 200th anniversary with an intense and moving performance of Bach’s “St. Matthew Passion” before a full house at Symphony Hall (Boston) on Friday (March 27). H+H’s Music Director Harry Christophers deftly led a period orchestra and 34-voice choir, augmented by two of the organization’s youth choruses, and a sterling group of soloists, whose brightest star was tenor Joshua Ellicott in the role of the Evangelist. The performance created a memorable occasion for H+H, which gave the first complete American performance in 1879.

Ellicott expressed a full range of emotions, which wonderfully narrated the story of Christ’s trial and crucifixion. His voice easily transitioned between a vibrato and a smooth, straight tone. But as the narrative grew increasingly agitated, reflecting the Passion story, his topmost notes rang out and seemed to spur on the chorus and orchestra. He also had an engaging way of leaning into notes, such as when he related how Peter denied Jesus three times and then went out and wept (“weinte”) bitterly.

As Jesus, baritone Roderick Williams sang with a warm and inviting voice that was also noble and intense. He seemed to have almost every note memorized because he often sang directly to the audience without referring to his score.

Soprano Joélle Harvey sang with beautiful phrasing, but her “Blute nur, du liebes Herz!” started a little too softly. Fortunately, she increased her volume, and the aria “Ich will dir mein Herze schenken” became one of the highlights of the evening. Combining power and passion in her singing, mezzo Anna Stéphany created many poignant moments in her reflective arias, such as in “Buss und Reu,” but her diction was not always clear.

Tenor Matthew Long sang with conviction and urgency, employing a focused vibrato and tone that contrasted well with Ellicott’s. Baritone Sumner Thompson distinguished himself with vibrant singing in arias and roles that included Judas and Pontus Pilate.

Conducting without a baton, Christophers drew from a large palette of gestures, including using his shoulders, to elicit dynamics from the chorus and orchestra that marvelously matched the text. The chorus maintained an exceptional blend even when it conveyed an angry mob shouting to crucify Jesus. The double choir formation, mirrored by the orchestra, worked seamlessly, including the tricky sections such as the beginning of Part II when phrases were traded quickly between the ensembles.

The “St. Matthew Passion” is dotted with sections that feature small ensembles, which allowed for exceptional contributions from the woodwinds, continuo, and other parts of the orchestra. Concertmaster Aisslinn Nosky excelled in her solo during “Erbarme dich,” but Associate Concertmaster Christina Day Martinson’s violin seemed to betray her with intonation problems during “Gebt mir meinen Jesum wieder.”

At the end of the performance, applause unfortunately broke out before Christophers could lower his hands, but that reaction also revealed the pent-up enthusiasm of the audience. The loudest cheering erupted when Ellicott came out for a solo bow, but it continued thunderously for the entire assemblage in appreciation for creating a memorable experience.
Posted by James Bash at 2:12 PM