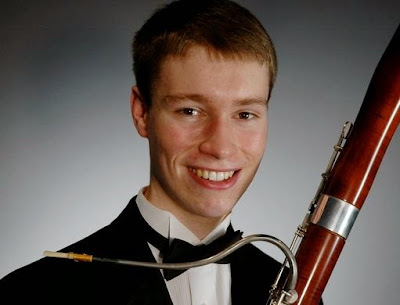 After hearing Keith Buncke live, I understand how this 21-year-old phenom won the principal bassoonist position with the Chicago Symphony Orchestra. Buncke, the featured guest artist at the Portland Columbia Symphony concert on Friday (March 13th), played with a level of maturity that is astounding. His impeccable and artistic performances of works by Heitor Villa-Lobos and Carl Maria von Weber marvelously showed off his talents in contrasting ways. The concert was a homecoming of sorts for Buncke, a tall and lanky fellow who seemed to resemble the instrument he plays so well. He grew up in Lake Oswego and was still in his junior year at the Curtis Institute of Music when he won the principal bassoonist post with the Atlanta Symphony.

One of the fun things about the concert was brief introduction given by Betsy Hatton, who is PSCO’s executive director and a violinist in the ensemble. She remembered getting a phone call several years ago from Mark Eubanks, Buncke’s teacher, who asked if there were any age restrictions for someone to become a member of the PCSO. Hatton replied that there were not such restrictions. So Buncke competed in a blind audition for the principal bassoonist position and won it at the age of 15. Hatton then proudly said, “We gave him his first paycheck.”

In “Ciranda das sete notes” (“Dance of the Seven Notes”), Villa-Lobos used seven notes of the C-major scale to fashion a fantasy for the bassoon soloist and orchestral strings. Buncke expressed lyrical tones with a slight vibrato that could be heard over the orchestra. His handling of ascending scales that often bubbled up from the basement of the instrument and ended somewhere in upper story then went back downstairs again. In a later section, while the bass violins established a gently rocking current, Buncke elicited a mellow lament that floated above. The piece ended with Buncke playing an elegant note that he held for a long time before joining the orchestra on a short and much lower one.

Weber’s “Andante and Hungarian Rondo” is considered by many to be the most popular bassoon concerto after Mozart’s. Buncke introduced the languorous theme and deftly launched into its variations, exchanging some of them with the orchestra along the way. Duets between Buncke and his colleagues in the bassoon section were memorable, and the dance-like sections had a good bounce to them. Buncke played with panache, making it all look incredibly easy.

Manuel de Falla’s Suite No. 2 from “The Three Cornered Hat” also received a spirited performance from the orchestra. The French horns, Brad Hochhalter, principal oboe, and Ann van Bever, English horn deserved kudos for their fine playing. George Enescu’s “Romanian Rhapsody No. 1” came off a bit flat and under-rehearsed. It needed a lot more zip in order to get that wild, Hungarian feel.

Postscript: Last June, I got to hear the Chicago Symphony's principal bassoonist David McGill in his final concert with the orchestra. If you want to read about that concert, click here.
Posted by James Bash at 7:09 PM