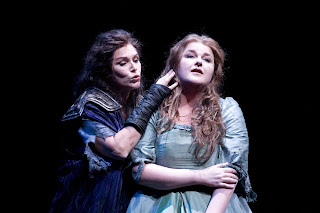 Seattle Opera’s production of Richard Strauss’ “Elektra” is gripping, in-your-face, and very loud. From the opening curtain which split in half to the final Totentanz of Elektra as she celebrated the death of her mother and stepfather, the audience on Wednesday evening at McCaw Hall received nearly two hours of unrelenting, dark drama, and it was all outstanding.

Janice Baird, making her Seattle debut in the title role, completely embodied the half-crazed woman who was completely consumed by vengeance for the murder of her father, Agamemnon, King of Mycenae. Combining her very powerful and expressive soprano voice with committed acting, Baird’s Elektra commanded the stage, striking fear in the hearts of anyone she felt was against her. Baird hit all sorts of difficult pitches spot-on and with artistry, Baird’s singing was thrilling – even when she sang about slaughtering her mother and stepfather.

Equally talented and convincing was soprano Irmgard Vilsmaier as Elektra’s sister, Chrysothemis, who only wants to be rid of the family curse and live a normal life. It’s quite a feat to combine fearfulness and yet sing with passion and accuracy that can be easily heard above a 90-piece orchestra, but Vilsmaier has the chops and seemed to get stronger as the opera progressed

Mezzo-soprano Rosalind Plowright delivered a superb Klytämnestra, baring her conflicted personality like a wounded animal. Together with her lover Aegisth, Klytämnestra killed her then husband Agamemnon some years before the action of this opera began, and they took over the throne. Plowright’s Klytämnestra is so riddled with nightmares that she can barely walk and gives everyone the heebie jeebies after she removes her oversized, decadent crown to show how much hair she has lost. Yet, after she receives news of Orest’s death, she is reinvigorated and finds the will to live.

As Orest, the banished brother of Elecktra and Chrysothemis, Alfred Walker’s forceful baritone was solid as a rock. Richard Margison made a credible Aegisth, but the part is so short that it’s difficult to say anything more.

The four maids (Cynthia Jansen, Sarah Mattox, Melissa Parks, and Emily Clubb) and their overseer, Mary McLaughlin, helped to set the tone of the story with their mocking of Elektra. When the fifth maid, Eleanor Stallcop-Horrox, showed empathy for Elektra, the other maids turned against her, dunking her head in a bucket of water that they had used to clean the alter of the blood of people that Klytämnestra sacrificed in order to get rid of her demonic nightmares.

The Seattle Opera orchestra played outstandingly throughout. This symphonic opera and can almost stand alone on the concert stage. The brasses, strings, woodwinds, and percussion were masterfully led by Lawrence Renes, who conducts a lot in Europe and is getting more gigs in the US.

Wolfram Skalicki’s dark and bleak set, last used by Seattle Opera in 1996, was enhanced by the expert lighing of Marcus Doshi. The mixture of modern and ancient costuming also worked well. Impressive especially were Klytämnestra’s retinue of sycophants in their garish modern, red numbers.

At the very end of the opera, after the killing is over and Elektra dead, Orest shuts the doors on Chrysothemis, giving the impression that the family saga is still not over.

Remaining performances of “Elektra” take place on October, 25, 26, 29, 21, and November 1. Seattle Opera is offering a Halloween special: operagoers who arrive in costume for the Friday, October 31, performance of Elektra can receive one free ticket to the evening’s performance, with the purchase of a full-priced ticket.
Posted by James Bash at 12:37 PM