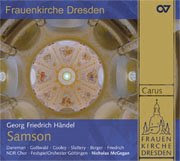 Carus Verlag recently released a new three-disc set of Handel’s titanic oratorio Samson, featuring Nicholas McGegan again teamed up with collaborators the FestspielOrchester Göttingen and the NDR Chor, as well as a bevy of world-class soloists. Although only three years old, one can expect many great things from the FestspielOrchester in the future; under McGegan they have released three Handel works on the Carus Verlag label: Acis und Galatea, Solomon, and now Samson.

The story of the biblical hero Samson proved fertile ground for Handel’s boundless imagination, and there are few as well-equipped to realize Handel’s vision in our day as Nicholas McGegan.

Thomas Cooley, singing the title role, delivers a mixed performance in this release. While technically never less than precise, some of the arias, especially on the first disc, come off as just that—technical. While such precision is admirable, if it is not accompanied by sympathetic emotional interpretation, it may come off as dry, a risk that runs particularly high when singing works from the Baroque. Alto Franziska Gottwald, in the important role of Micah, has a voice that is heavy and oft overbearing.

The great advantage to a work of this length is that even if some portions occasionally suffer for want of interpretation, there is so much to hear that it is worth listening to that the less satisfying segments do not detract from the overall enjoyability of the presentation. One Cooley aria in particular, ‘Thus when the sun,’ is truly exceptional, a breathless moment of reverie as Samson contemplates the fate he must now know awaits him, the punishment for his treachery coupled with the bittersweet redemption for failing his God. Cooley here displays a true emotional verité, encapsulated within yet never confined by the stylistic strictures of the baroque. Soprano Sophie Daneman as Dalila provides a welcome respite from the largely lower-range and dark-timbre voices featured in this oratorio; of particular delight is the rich, argumentative duet she sings with Samson, 'Traitor to Love!'

McGegan and the FOG are absolutely spectacular—in addition to the the flawless accompagnato skills they bring to the table, the sinfoniae that are scattered throughout exhibit crystalline perfection and could stand alone. The NDR Chor is as able and exact a baroque choir as one could want, and their English diction (for a non-native speaking choir) is superb. Early music lovers will find everything delightful about the baroque era in this three-hour epic masterpiece.
Posted by Lorin Wilkerson at 8:30 PM