Press conference with James Conlon at the Van Cliburn Competition 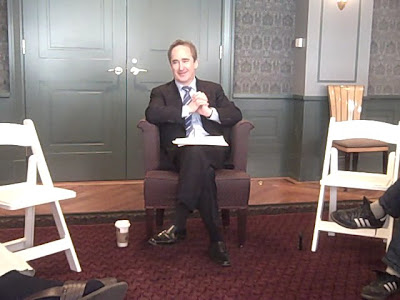 On Thursday, members of the press were treated to a special meeting with conductor James Conlon, who is leading the Fort Worth Symphony in all of the concerti that are played during the final round of the Van Cliburn Compeitiiton. (FYI: Conlon has been the conductor at the Van Cliburn since 1997.) We met him in the green room at Bass Performance Hall and peppered him with all sorts of questions. The following transcript covers most of the conversation:

Tell us about how you work with the Van Cliburn finalists.

Conlon: I enjoy conducting these young pianists. I have enough experience and confidence that I can pretty much deal with just about anything that they are going to throw at me. I do collaborate with them in sense that there are mutual issues to clear up. I try to help them to be at their best for the competition. I don’t try to impose a tempo on them. I tell them that I want to hear you play. Within 10 minutes, I have a pretty good idea of what their style. I only say something when it [their playing] goes out-of-the-box so far that it is not right. I don’t mean that I don’t accept out-of-the-box imagination and creativity, because that’s what we want. I’m referring to something that impossible to execute. So, like an indulging parent I give them maximum space. Let them be who they are so that they can show that to the jury and the public

Have the soloists changed in any way over the years?

Conlon: All of the competition pianists are at that same point of life in their careers. They have emerged from their conservatories, and they want, very much, to be out in the public. So that factor has not changed over the years. I happen to love this stage in the life of an artist. This group of pianists here at the Van Cliburn surprises me every day. I meet every one of them for an hour. I wish that I could have five hours, but that’s the way it is. Sunday night the finalists are decided and Monday morning we start. I tell them that I won’t impose on them, but I also tell them what the orchestra and a conductor needs from them. Yes, you are a soloist. Yes, you may be a great pianist, but playing concerti is a collaborative effort and we – conductor and orchestra – expect things from you and need things from you. Some young instrumentalists don’t understand that when they get their big chance to play with orchestras. Especially young pianists, who can spend their entire lives in the practice room, may have this problem. Whereas violinists, violists, and cellists have to play chamber music or play in an orchestra from an early stage. So, one of the reasons I was motivated to come here – a competition is an imperfect way of sorting out the next major artists – I’m sure that you’ve all dealt with the issue that in a Darwinian way there are certain people who often win the competitions and they are the least interesting artists. That might be because of two factors: juries tend to move more to the middle. If you are too far out of the box won’t get enough votes. The other factor is that species tends to emerge from the competition which boils down to who has the best nerves. Yet the ones with the best nerves are not necessarily the most interesting artists. And there are the extreme cases like Glenn Gould who could barely get himself onto the stage and Carlos Kleiber hated to go on the stage.

So, in the past I’ve conducted orchestras that have engaged a winner of a competition and that young person doesn’t listen to the orchestra. He or she assumes that you understand. Well, I and the orchestra are professionals and we get through the concert and we never want to see that soloist again. So sometimes there’s an arc or curve to the careers of these people. For two or three years their trajectory is up and then it goes down and it never comes back again. So, I made it clear that if I were to come here to conduct, I would like to make a stab at making it clear to the pianists that they have responsibilities to us. For example, I tell them not to crash in before the orchestra because it takes time for the sound of an orchestra to get there. It’s a fact of acoustics.

Now regarding the Japanese pianist who is blind, Nobuyuki Tsujii, we should restrain ourselves on this issue, because it distracts us from the essential issue that this young man should be judged on his performance on objective standards like any other musicians. It is on a human level astounding and very moving. I have never seen anything like this. So, it’s about the music even though the story of this man is very moving on a human level.

Now yesterday I had to work with him and it was a very enriching experience for me. He has an astounding talent. In Rachmaninov’s second piano concerto there’s a huge C major chord that we have to coordinate. I thought that we count the beats in the silence, but that’s not going to work; so his English interpreter came up to me and said that he is very sensitive to people’s breathing; so I inhale audible, and so far it’s worked every time in rehearsal. It’s amazing, and hopefully it will work in the concert.

Are you optimistic about artistic talent?

Conlon: Yes, we’ve got more people listening to classical music than ever before. But now we are producing so many talented musicians that we don’t have enough places for them, especially for pianists. There are more orchestras now than ever before. And the US now has 10 or 15 of the best orchestras in the world. But China will probably surpass us in a generation or two.

Have you noticed any trends among the judges at the Van Cliburn?

Conlon: I am not privy to the whole process of the jury here. I come in right at the end, and they ask me of my assessment from my perspective. Then they do what they want with that. I am not in on their discussions.

Also, I didn’t hear any of the recitals before the finals began because last Saturday I was in Cincinnati conducting the Mahler 8th as in celebration of my 30th year as the director of the May Festival.

What can conductors do to help the marketing of classical music.

Conlon: Basically nothing. Conductors don't talk much with other conductors. You know there are no conductor's union. Piere Monteaux once said that a conductors is an old man standing at the top of a ladder who is kicking off everybody who is trying to come up.