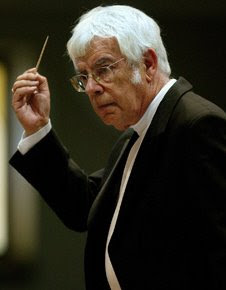 I came to Arlene Schnitzer Concert Hall with great anticipation on Saturday evening (June 27), because Helmuth Rilling and the Oregon Bach Festival choir and orchestra were in town to perform Haydn’s “Creation.” I had sung this piece under Rilling at least ten years ago (more about that later), so I willingly took a seat in the balcony where this hall's acoustics are best.

Rilling knows this music forward and backwards, and he conducted the entire piece from memory, but this performance needed more spark and much more volume from the chorus. The lack of vocal heft from the chorus became evident right away when the choir sang “Und es ward Licht” (“And there was light”). The orchestra easily overpowered the singers so much that the word “Licht” was completely obliterated – even the final “t” couldn’t be detected. Later in the first part of the piece, the orchestra overwhelmed the chorus again. Fortunately, the balance between the orchestra and the choir was a lot better in the second and third parts of the piece, but the chorus still needed to project a lot more.

Tenor soloist James Taylor sang outstandingly with supple articulation, light yet resonant tone, and excellent diction. Soprano Robin Johannsen’s clear and focused voice easily negotiated all of the tricky runs but didn’t have much warmth except when she sang of love during the first aria in the second part of the piece. Bass-baritone Christòpheren Nomura had plenty of warmth in his upper register, but his lowest notes were no-shows. That really hurt when he tried to project the low D while singing of the worm (“Am Boden, das Gewurmüm”).

The orchestra seemed to have problems from the initial downbeat, because Rilling after acknowledging the opening applause quickly turned to the orchestra and began conducting without a moment’s pause. And Rilling often crouches – sort of like a cat – so his baton movement can’t be the easiest thing for orchestra members to see. This happened most right after the second part of the piece began. Some of the violins were not in sync, and even Rilling looked over that section in order to figure out what went wrong. On the positive side of the ledger, principal flutist Lorna McGhee accompanied the soloists superbly throughout the work.

I really liked the super-titles that the Oregon Bach Festival used, but a computer glitch after intermission kept some of the titles from appearing for a short while.

Before the concert start, OBF's executive director John Evans told the audience that the festival plans to return to Portland next year with two or three offerings. More will be revealed later.

------
PS:
I have the highest respect for Rilling (and even have a Rilling bobble-head) and had the pleasure of singing this piece as a member of the Portland Symphonic Choir in some Oregon Symphony concert that Rilling directed. This was in the mid-to-late 1990s and an ice storm occurred during that concert series. The weather was so bad that a few of the orchestra members missed the dress rehearsal and the opening concert as well. One of the real treats of that concert series was to hear Thomas Quasthoff as the baritone-bass soloist. His voice is the gold standard.
Posted by James Bash at 12:55 PM