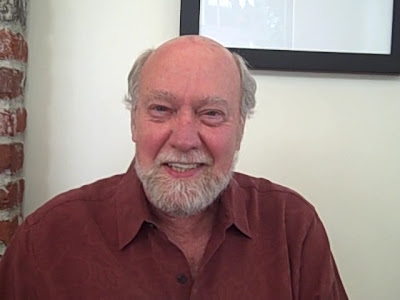 (Harold in Italy – actually at Café Umbria in the Pearl District)

Harold Gray, now in his 31st year as artistic director of the Portland Piano International, is getting geared up for the 2009 Portland International Piano Festival. Running from July 12th through the 19th at the World Forestry Center, the festival is jam packed with an intriguing slate of artists, teachers, and films.
I chatted with Gray at Café Umbria in the Pearl District where he gave me the lowdown on the festival.

What type of pianists and concerts does the festival offer?

Gray: For the Festival, I try to bring artists who often play lesser-known works. Andrew Russo offers everything from traditional classical music to techno-rock works. This recital includes music by the wonderful contemporary Australian composer Carl Vine, and pieces by Crumb and Adams as well as his own arrangements of Stravinsky, Mussorgsky and Borodin. Vine’s music is really taking off. His first sonata was a big hit at the Cliburn competition several years ago.

Soheil Nasseri is a pianist who lives in Berlin and New York City. He brings an interesting program with Rachmaninoff, Schubert, and Beethoven, plus the west coast premiere of Richard Danielpour’s “Three Preludes.” Although I’m not familiar with this Danielpour piece, I know of his other pieces that are very expressive, beautiful, and accessible to everyone.

Jeremy Denk is a true genius and an amazing pianist. He’ll be playing everything from Renaissance pieces by Byrd to Scarlatti and Ligeti sonatas. He’ll do a “Think Denk” lecture demonstration on July 19th as well. We don’t know exactly what he will be talking about, but I’m sure that it will be original and very, very interesting.

The final concert on Sunday features the Anderson-Roe duo. This is Greg Anderson and Elizabeth Joy Roe. Roe was a participant in one of the recent the Van Cliburn competitions. She and Anderson graduated from Juilliard and formed their duo. Their concerts are a lot of fun. You should see their web site; it’s very entertaining at a high, high level. They do their own transcriptions of some traditional composer’s works like Busoni and Mozart, but they also do transcriptions of Radiohead and others contemporary groups.

Paul Roberts will be here for a lecture and recital. He’ll also do some readings from his new book about the Ravel’s piano music. And that book is pretty close to publication.

Oh, and I almost forgot to mention that the Van Cliburn silver medalist, Yeol Eum Son will be the here to play Schumann, Bates, Liszt, and Chopin. She has a huge repertoire, and it will be great to see her play - a real up and coming talent.

This festival has a unique combination of artists who also teach.

Gray: Teaching is very important to me. That’s one of the main purposes of PPI in general, and it’s very important for the Festival is to stimulate and inspire teachers. I include myself in that. The festival features teachers who are coming with different ideas: Gail Berenson, professor of piano at Ohio University and a past president of the Music Teachers National Association, and Jessica Johnson who teaches piano at the University of Wisconsin-Madison. They will be working with young pianists for a couple of days.

Catherine Kautsky will be here to present a lecture on Schumann and his influences and another lecture on the time around WWI when politics, music, and culture collided.

We had over 60 applicants from young pianists who wanted to take part in the institute part of the festival. We could only select a dozen or so of them. There’s a group coming up from San Francisco to play duo piano pieces for Anderson and Roe.

And the Festival has films as well?

Gray: Yes, one of the films that we’ll be showing during the festival is about one of Jeremy’s teachers, György Sebök. Sebök was the teacher who was most influential in my musical life.

We will also show a film about Artur Rubinstein that was thought to be lost. It was shown in the 1969 Cannes Film Festival and then forgotten. One of our patrons at PPI dug up the film. That re-discovery is an incredible story that involves Rubenstein’s family, 35mm film rolls, and a certain web site where people sell things. A lot of people were looking for this film, but our patron found it after doing an online search with an incorrect spelling of Rubinstein’s name. So the presentation of this film will be like a re-premiere.

It sounds like a terrific week. Good luck with everything!

Gray: Thanks! See you there!

For more information about the 2009 Piano International Festival, click here.
Posted by James Bash at 4:14 PM