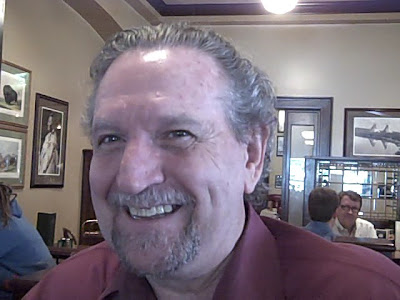 I caught up with Stephen Llewellyn (aka Operaman) at Jake's Grill yesterday. Some of Llewellyn's friends, in appreciation of his generosity, got him a year's subscription to Met Player, an online video service provided by Metropolitan Opera. And Llewellyn told me about a creepy yet fascinating performance by Bryn Terfel in a production of Don Giovanni at the Met in 2000.

Llewellyn has an interesting background, having sung as a chorister for Benjamin Britten and taking voice lessons from Peter Pears. He also subbed for Ian Partridge once at the Royal Festival Hall in London singing a performance of Rameau's "Castor et Pollux."
Posted by James Bash at 2:31 PM