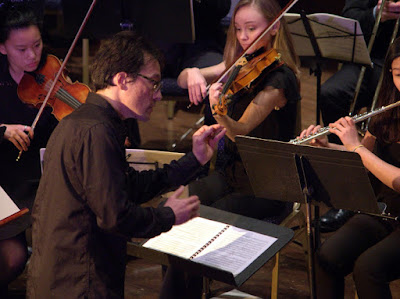 How's this for something different: on Thursday (February 25th) the PSU Symphony, under the direction of Ken Selden, will perform works by Gustav Mahler, Sergei Rachmaninov, and Frank Zappa at the Crystal Ballroom. The Mahler will feature baritone Harry Baechtel and one of the Rachmaninov pieces will put the spotlight on Saelin Ho, who won Portland State University's concerto competition. The doors will open at 6:30 pm and the show will start at 7:30. Tickets are $15 in advance, $20 on day of show (students and seniors: $10 advance, $15 day of show. (Click here to purchase.) Sound intriguing? I talked with Selden to find out more.

Is this the orchestra's first performance in the Crystal Ballroom? Why choose this venue?

Selden: Yes! This is our first time there, and as far as I can tell, it's the first time in their hundred year history that anyone has performed a program of symphonic repertoire. I've been at PSU for ten years now, and I've brought the orchestra to practically every church and concert hall in Portland; I thought this year we could do something totally different. I'm definitely one of those people who think that the average classical concert experience can be rather uptight (!) so it's a great chance for people to go with their friends and family, enjoy some beer, relax and listen to great music.

How many members are in the orchestra? I'm wondering how you are going to fit everyone on the stage - the Rachmaninov will have a piano on the stage and Mahler typically requires large forces.

Selden: Fortunately, "Songs of a Wayfarer" is one of Mahler's early works, so it's not a huge orchestra like you'd find in his symphonies. Nevertheless, the orchestra is probably about forty to fifty players, and we are going to be packed like sardines on the stage. They are actually building a platform for the piano, which will be placed in front of the stage

Selden: That's an interesting question, James. I think it's great to have a program that ties together unexpected material - and I really love putting together repertoire that brings people together. You get Mahler fans and Rachmaninov piano concerto fans together in a room with Zappa fans, and everyone ends up experiencing and appreciating new things. Rachmaninov and Mahler are both considered late Romantics, but they are so different in terms of their treatment of the orchestra and of their approach to harmony and expression. Zappa of course has that avant-garde element mixed with his rock background; what people don't necessarily know is that he was also a composer of tremendous lyricism!

What Zappa [pieces are you performing? Are they arrangements?] I didn't know that Zappa wrote any orchestral music. Heck, how did you find this piece?

Selden: There's a great Zappa piece called "Music for Low Budget Symphony Orchestra." It's not very well known, except maybe for hard-core Zappa fans. How perfect is that for a university orchestra!?

Zappa recorded and performed several versions of it and you can find them pretty easily, for example on Youtube. We're sort of doing our own version, and one of the things that my students found refreshing was that it turns out to be an unexpectedly wistful and thoughtful piece of music. We're also going to play orchestral covers of two songs: "America Drinks and Goes Home" and "Mother People." We made a decision to play instrumental versions without drums or singers mainly in order to explore his harmonic style and to hear those melodies from a new perspective. "America Drinks," for example, is a parody of popular American love songs, but the actual compositional material is incredibly beautiful. And the huge surprise in "Mother People" is that there is actually a lovely waltz right in the middle of it, when the lyrics say, "Do you think that my pants are too tight?" His sense of humor was always pretty devastating.

Tells us about Saelin Ho. Is she a PSU student?

Selden: Yes, she's a PSU student, or rather, a recent graduate, I guess. She's an incredibly gifted and talented musician and she was the graduate teaching assistant for the opera area, which means she accompanied all the singers in their preparation and rehearsals for the PSU opera productions.

Saelin won the PSU Concerto Competition two years ago, but at the time she was swamped with her opera accompanying activities and we couldn't schedule a performance of her concerto. And then I was on sabbatical, so we are now finally having a chance to perform.

She's going to perform the first movement of the Second Piano Concerto, which is probably Rachmaninov's most famous piece. This is a very powerful work, but what I think is quite interesting in Saelin's approach is that she brings out the poetic qualities that I don't think we often hear in performances of this piece. To me, it's a very effective interpretation, and it allows us to hear a familiar piece in new ways.

By the way, I should mentioned that Portland Piano Company is sponsoring our event, so we'll have a really great Steinway piano.

We are also performing one more Rachmaninov piece, the "Adagio" from the Second Symphony, which is another of his great lyrical masterpieces.

What should we know about Harry Baechtel? I found his bio on the web, and it looks like he is a Mahler specialist.

Selden: Yes, that's right. Harry joined the PSU faculty last year and he's doing an amazing job with our voice students. In addition to teaching voice, he's also a historian; in fact he's currently teaching a class on Mahler! It's great for the students to see that kind of versatility - to take his class and then hear him perform. Interestingly, from my perspective as a conductor, what I admire and value most about his singing is that his approach is absolutely intelligent, thoughtful and deeply heartfelt. I mean, I don't want to generalize, but how often do we use those kinds of words to describe singers!!

Mahler wrote his own lyrics for "Songs of a Wayfarer," about a young man whose sweetheart is getting married - but of course to someone else! and by the end of the last song, he goes to sleep under a Linden tree, so there's that connection to Schubert's "Winterreise," for example. It's a pretty amazing song cycle and the students are really enjoying the experience of getting to work on it.

Will there be a mosh pit for the Zappa?

Selden: Ha ha! I'm just getting started on my Zappa cycle, so those songs that inspire a mosh pit will have to wait for the next time!
Posted by James Bash at 4:27 PM

Hey, these are just great information about the upcoming PSU Symphony concert. I am eagerly looking forward to the event. If you have any official details then please share my friend!! I didn’t attend their last event at the “Crystal“ event venues but I would like to attend the upcoming one.