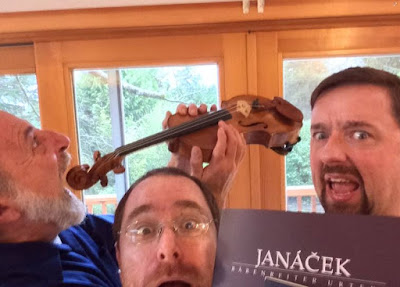 Music can be the language of obsession in more ways than one as 45th Parallel concertgoers found out on Friday evening (March 4) at The Old Church. Whether fixated on the music of Bach, or on music as an outgrowth of unrequited love, or on music as a purely unrelenting series of sounds, members of 45th Parallel played the concert program as if possessed, delivering intense interpretations of works by J. S. Bach, Eugène Ysaÿe, Leoš Janáček, and Johannes Brahms.

To kick things off, violinist Gregory Ewer gave a commanding performance of the “Preludio” from Bach’s Partita No. 3 in E major (BWV 1006). He handled the phrasing of its seemingly endless series of sixteenth notes and the various voices with panache and shaped the music with agile dynamics. The warm acoustic of The Old Church enhanced the flashy piece, making it sort of well…. inviting.

The Bach was paired with the “Obsession; Prelude” from Ysaÿe’s Sonata for Solo Violin, No.2, which starts with a quote from the “Preluido.” Sharply played by Adam LaMotte, the piece also has rows of sixteenth notes that alternated between inspired fragments from Bach and fragments of the “Dies Irae” from the Catholic mass for the dead. Deft fingerwork and bowing by LaMotte made the virtuosic piece look easy peasy.

Ewer then came back on stage to bring the house down with a scintillating performance from memory of the “Chaconne” from Bach’s Partita No. 2 in D minor (BWV 1004). Ewer shaped the piece well, letting the slower sections unwind naturally before unreeling some shockingly fast runs. When he created two voices – an upper one against a lower one, it was as if he were fashioning an extended conversation between two people. After finishing, Ewer’s superb performance drew ovations from the enthusiastic audience.

Leoš Janáček’s String Quartet No. 1 (“Kreutzer Sonata”) was inspired by Leo Tolstoy’s novella “Kreutzer Sonata” in which a husband suspects his wife of having an affair with her music partner. The story culminates in a fit of jealous rage in which the husband stabs his wife with a dagger after she plays Beethoven’s “Kreutzer Sonata” with the violinist. The other intriguing background in regards to the piece was Janacek’s own obsession with a married woman and the numerous unsolicited letters that he wrote to her.

For the 45th Parallel concert, Janáček’s quartet was performed in a slightly unusual way – with actor Beth Thompson reading sections of Tolstoy’s story before each movement was played. Thompson’s reading was incisive (except for her pronunciation of “Kreutzer”) and inspired, and it was easy to feel how the story related to the music. Violinists Ewer and LaMotte, violist Charles Noble, and cellist Justin Kagan played with verve and intensity, creating an edge-of-the-seat experience. Grumblings from the cello, nervous chattering from the upper strings, and visceral, snarly eruptions from all sides signaled the doubt and fear plagued the mind of the story’s protagonist. Even when the mood relaxed a bit, it seemed that an ominous mood was always in the background. The musicians created tension that knifed about and finally exploded with a series of darting phrases in the final movement followed by an accelerated heartbeat that raced to the end of the piece.

Brahms’s long term, unrequited love for Clara Schumann was perhaps crystallized to the greatest degree in his Piano Quartet No. 3 in C minor, which he finished in 1875 after putting it aside for 20 years. The piece received an emotive performance by pianist Janet Coleman, violinist LaMotte, violist Noble, and cellist Kagan. I only wished that the piano had a brighter tone, but Coleman made the most of it with sensitive playing that balanced extremely well with the strings. While the first movement seemed to need a bit more shape, the three remaining ones were extremely satisfying. The thrilling finish on the second movement, the lovely, lyrical melody by the cello and piano at the beginning of the third, and the violin and piano duet at the start of the fourth were some of the highlights that made this performance memorable.
Posted by James Bash at 7:28 PM