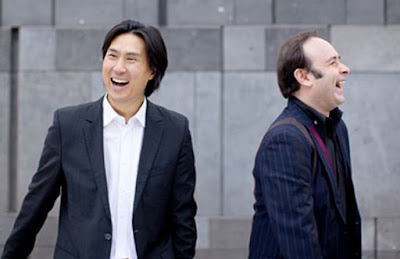 Igudesman & Joo will be performing with the Oregon Symphony this Sunday evening at the Arlene Schnizter Concert Hall. The duo consists of classical musicians Aleksey Igudesman and Richard Hyung-ki Joo, whose shows combine comedy with classical music and popular culture, including country western, rap, and jazz. They are hilarious and at the same time top notch musicians. I talked with Joo over the phone while he was getting ready to rehearse one of their shows in Seattle. Here is part of our conversation.

How long have been performing as a music/comedy duo?

I read that you met each other while studying at the Yehudi Menuhin School in London.

Joo:  Yes, that’s where we met when we were 12 and the madness all started. It was a very small school with a maximum of 50 students. We were very lucky that Menuhin was still around in those days. His inspiration definitely rubbed off on us. Besides being one of the world’s greatest violinists, Menuhin was a humanitarian, a very open-minded person. He was probably the first serious classical musician to cross over and play with musicians like Stéphane Grappelli, Ravi Shankar, and Duke Ellington. He also had a wonderful sense of humor. He practiced yoga until his last day, and he could stand on his head. He directed the Berlin Philharmonic a couple of times while standing on his head and waving his legs. We think that had he lived a little longer and seen our show, he would have liked it.

So your humorous skits started while you were in school?

Joo:  We developed some things while we were still in school, experimenting with ideas. We wanted to create a concert that we would want to go to ourselves. We found classical concerts an alienating experience even for ourselves as passionate, idealistic students. We found ourselves getting uninspired and the whole ceremony pretentious, stuffy, and off-putting. We decided that we would make our own concerts according to what we desired. We went to a lot of theater and plays – especially Chekov, Wilde, and Shakespeare. We both grew up Monty Python. So, we thought that we would try to combine all of these elements in to one concert. Many years later we looked into our history books and realized that what we are doing is quite retro.

Joo:  Yes, and although Schickele is still creating pieces, he and the others you mentioned come from a time when classical references were more of a part of daily culture. Sadly, today we are less cultured in the area of classical music. I mean, in the 50s, 60s, and 70s Leonard Bernstein’s Young People’s Concerts were televised. Nowadays, even if something like that were to occur, it wouldn’t be televised. Back then, many homes still had a piano – even the lower and middle classes – but that all changed with the radio, TV, and the popularization of culture.

So what we do is challenging for us, but it’s a lot of fun. We have to not alienate audience by being too clever and by having too many musical jokes that only connoisseurs would get. We are serious musicians who have performed concerti and won competitions. Orchestras like to appear on stage with us because they realize that we are genuine musicians and not just clowns. For us, music is the most important thing and humor is secondary.

Is your show “BIG Nightmare Music” scripted so to speak?

Joo:  Everything is written out, but within that framework there are many moments for surprise and spontaneity. We encourage the orchestra in rehearsal to surprise us during the show. We tell them “Look if you have anything crazy that you would like to try and always wanted to do, do it! Don’t ask us for permission as long as it doesn’t sabotage the show and ruin the music. Just be our guest.

Once you give an orchestra permission to tap into their inner pranky child, the results are wonderful – especially for the audience. They see their local orchestra being human and having fun, and that is a connection on a much larger level.

Can you give us an example of something that happened at one of your concerts that really surprised you?

Joo:  One of the numbers that we’ll do with the Oregon Symphony is a number that we call “Rachmaninoff by Himself.” In this number, I start singing to the words of “All by Myself,” and I start to get so upset that I start crying. This crying becomes so infectious that the whole orchestra starts crying as well. All sorts of things have happened when we have done this number with orchestras. So when we did this with one orchestra, that orchestra had a very timid, sweet, quiet harpist in rehearsal, but during the concert, she walked in front part of the stage and got down on her knees, wailing, and thumping the floor with her hands. It was just nuts, and she totally amazed the orchestra.

We have had a number called “Dancing Violinists” where we have had all of the violinists do an Irish step dance while playing their instruments. One fellow in the orchestra had this outfit on where a woman came from behind him – between his legs – and it looked like she was going to grab his crotch – then she just pulled his trousers off – they were Velcroed – to reveal him in a tiny little kilt.

Judging by the Portlandia series, we are hoping the members of the orchestra will come up with some weird stuff.
Posted by James Bash at 11:52 AM