Judged by the vigorous production of Giuseppi Verdi’s “La battaglia di Legnano” mounted by Sarasota Opera, you’d figure that it would be a staple of many opera houses. Yet this opera remains little known for the most part because of Verdi cranked out so many operas that most companies are kept plenty busy circulating his best ones. So it was truly a special occasion to witness the performance on March 16th at the Sarasota Opera House where the company was completing its cycle of all of Verdi’s works in a monumental effort that began 28 years ago.

Written in 1848, “La battaglia di Legnano” is the fourteenth of Verdi’s operas and grouped with his early works. Like “Il trovatore,” it has the framework of a melodrama but with fewer memorable melodies. Inspired by an actual battle that took place in the Twelfth Century, the story revolves around a Veronese warrior, Arrigo, who had been wounded in battle. Because Arrigo was reported to have been deceased, his beloved, Lida, married his best friend Rolando. Arrigo, however, has not died, and shows up in town where is welcomed by Rolando. Arrigo and Lida still have strong feelings for each other, they are in a terrible bind that is made worse because Lida has had a son by Rolando. Rolando figures things out and locks both of them in a room so that Arrigo cannot get to the field of battle to defend the town, thereby becoming totally dishonored in the eyes of his countrymen. Arrigo overcomes his prison by jumping off the balcony to join the battle. He then becomes the hero of the battle of Legnano but is mortally wounded. Before his expires, he is reconciled with Rolando and Lida.

Sarasota Opera’s production was led by the dashing Martin Nusspaumer who cut a terrifically heroic figure in the role of Arrigo. His voice had a robust resonance from to bottom, but he had problems negotiation the highest notes cleanly. He may have been suffering from a cold or perhaps his problems were an indication of something more serious with his vocal chords. In any case, he finished the opera without relinquishing the role to a cover singer.

Jennifer Black’s strong singing and acting revealed Lida’s conflicted emotions, but it was the Rolando of Todd Thomas that really plumbed the depths of character. His wrath against his wife and his best friend were frightening, and his love for his son had a genuineness that could be felt all the way to the back of the balcony.

Young Bok Kim conveyed the steely nerves of Federco Barbarossa with terrific gravitas. Tara Curtis gave a solid performance as Lida’s handmaid Imelda. Eric Lindsey and William Roberts distinguished themselves as consuls of Milan as did Costas Tsourakis in the role of The Posestà of Como.

The soldiers choruses had a robust quality that verged on blood-thirstiness, and the townspeople held nothing back whether they feared becoming consumed by Barbarossa’s troops or celebrating the victory of the Lombardi forces. Chorus Master Roger L. Bingaman deserves plenty of credit for the uniform excellence of his singers.

Artistic Director Victor DeRenzi commanded the orchestra expertly, and their sound was well polished. Even the church bells in the final measure could be heard amidst the rising crescendo of the orchestra and singers. But there were no pianissimos in the production, after an hour of mezzo forte to double forte, more dynamic variation would have been welcome.

If symmetry is a virtue in staging, then this production was of the highest order. Director Martha Collins was amazing consistent in keeping the main characters in the center and everyone else balanced equally from left to right throughout the production. The scenery designed by Jeffrey W. Dean embraced the idea of symmetry wholeheartedly and captured the imagination as well. Howard Tsvi Kaplan’s traditional costumes perfectly complimented the entire effect as did the lighting of Ken Yunker.

Hopefully another opera company in the U. S. will try to produce this opera. It would be a shame to have to wait many years for Sarasota Opera to revive it. For some, it will be worth the wait in any case. 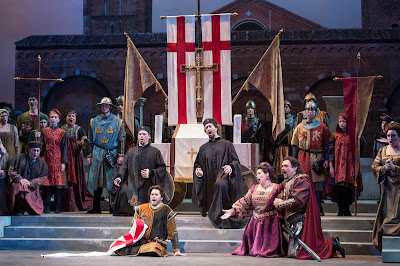