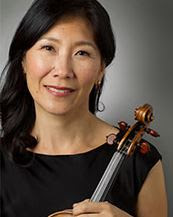 Sara Kwak’s top notch performance of Ernest Bloch’s Violin Concerto put an impressive stamp on an evening of Twentieth Century music at the Oregon Symphony’s concert on Saturday evening (March 12) at the Arlene Schnitzer Concert Hall. Her performance was the highlight of a program that put the spotlight on the orchestra ensemble, who excelled in playing Aaron Copland’s “Quiet City” with featured soloists Jeffrey Work (trumpet) and Kyle Mustain (English horn), Claude Debussy’s Prelude to “The Afternoon of a Faun,” and Béla Bartók’s Suite from “The Miraculous Mandarin.”

Bloch’s Violin Concerto is a rare number on most orchestral programs, but Kwak, who is in her fourth year as the orchestra’s concertmaster, made a strong case for it to be reconsidered. She beguiled the audience with arabesque-like figures above the orchestra and executed the animated passages with panache. Her cadenza in the first movement seemed to dwindle down to nothing before climbing out of the depths and then finishing off with the orchestra in full bravura fashion. One of the highlights of the second movement came when she suspended a bewitching ultra-high yet soft tone that quietly grew into a lovely melody. Her exchanges with the orchestra in the third had a playful echoing effect.

The orchestra accompanied Kwak deftly – including some marvelous fanfare-like passages – and made the piece breathe. There were sections that seemed to have a repetitive pattern that suggested a Native American influence, but, overall, the music-making by Kwak and her colleagues connected with listeners very well, and she received an enthusiastic standing ovation that brought her back to the stage four times.

In Copland’s “Quiet City,” the orchestra laid down a carpet of pure calm and solitude that was sprinkled with enigmatic mutterings from soloists Work and Mustain. Copland wrote the piece as incidental music for a play by Irwin Shaw in which a young trumpeter expresses his frustration with his situation one evening. The sounds that Work emitted had a slightly nervous quality that perfectly reflected the tenuous thoughts of that character. Mustain’s plaintive passages seemed to counter Work’s in a way that was complimentary.

From the Copland, the orchestra segued without pause to Bartók’s Suite from “The Miraculous Mandarin.” Starting with a wild cacophony of strings and brass followed by a gritty and lowdown line from the violas, everyone in the hall knew that they were in for something extraordinary even though the storyline – as reflected in the supertitles – was not particularly uplifting. The idea of an orchestra depicting the squalid life of three thugs using a girl to entrap men and then fleece them is not something that sounds inviting. But the superb musicianship of this orchestra – guided by Kalmar – really brought out the Tarantino-Pulp-Fiction-eque dimensions of the piece, making them heart-stoppingly visceral. Principal Clarinetist Louis DeMartino, Bass Clarinetist Todd Kuhns aided, and bassoons – abetted by the strings – laid down a line of tension and entrapment that teased the mind unmercifully. It was easy to picture the enticing girl by the window and the old rake (snarly trombones) and the young lad (oboe and English horn) and the ensuing violence after the thugs found out that they had not money. The situation ratcheted up a notched when the girl seduced the wealthy yet frightening Mandarin and the chaos after she tries to escape his clutches and the thugs finally seize their prey. The orchestra went full tilt in a furious frenzy though the final measures – and as the applause from the audience started up – you could see string players tearing the frayed horse-hairs from their bows.

To open the evening, Kalmar and company created wonderfully unhurried, pastoral scenes in their performance of Debussy’s Prelude to “The Afternoon of a Faun.” Superb playing by Principal Flutist Martha Long as well as the horns, woodwinds, harp, and strings evoked the idyllic and elusive reverie of the faun with invitingly warm colors. In the brief span of this piece, time just seemed to melt away and with it the cares of the world.
Posted by James Bash at 12:08 PM