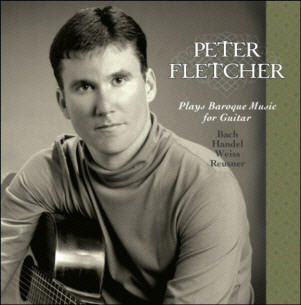 Peter Fletcher, a virtuoso classical guitarist who is based in New York City, will perform a free concert this Sunday in Tualatin of selections from his most recent recording. Entitled “Peter Fletcher Plays Baroque Music for Guitar,” this CD features the music of Johann Sebastian Bach, George Frideric Handel, Esaias Reusner, and Sylvius Leopold Weiss.

In this album, Fletcher uses impeccable playing to express each piece fully. Some numbers, like the Prelude and Allegro (from “Prelude, Fugue and Allegro” BWV 998) of Bach seem to fly by magically. Other works, like the Sarabande and Variations of Handel have a regal bearing. The Prelude No. 1 (from Bach’s “Well Tempered Clavier” Book I) is crisp and spot-on, and Fletcher’s deft rendition of Bach’s Cello Suite No. 3 (BWV 1009) embraces the expressive scope of this music with joy and depth.

Fletcher transcribed all of these pieces except Bach’s Chaconne (from “Violin Partita II in D minor” BWV 1004), which was transcribed by Segovia. None of the pieces have been dumb-down in any way; so you get the real deal, only with the guitar.

This Sunday (May 3) at 2 pm, Fletcher will play selections from this recording at the Tualatin Public Library (18880 SW Martinazzi in Tualatin). Other pieces that he might include in the program are Bach’s “E minor Lute Suite,” Fletcher’s transcriptions of music by Erik Satie and Edvard Grieg, Nikita Koshkin’s “Usher-Waltz,” Andrew York’s “Sunburst,” and Crolo Domeniconi’s “Koyunbaba.”

The “Peter Fletcher Plays Baroque Music for Guitar” CD was released on the Tower Hill Recordings label and is Fletcher’s fourth recording. He is working on an all-Grieg album for Centaur.
Posted by James Bash at 11:28 PM