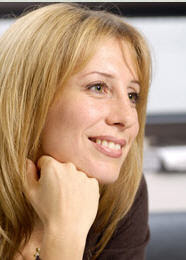 When a pianist places a score in the piano (on the inner frame) as sort of a security blanket for an important piano recital, I become suspicious and begin to wonder what might be wrong. That was a recurring theme running loose in my noggin during Ingrid Fliter’s concert on Sunday afternoon (April 5) at the Newmark Theatre as part of the Portland Piano International recital series. Fliter, the 2006 winner of the Gilmore Artist Award (with its $600,000 in monies) has established herself as one of the world’s preeminent pianists, but on Sunday afternoon she delivered a concert that was subpar for the most part.

The entire affair got off to good start with a nuanced performance of Bach’s “Italian Concerto” in F Major (BWV 971). Yet in the faster passages Fliter often would tap her shoes on the floor. She did turn a page on her Bach score, but didn’t seem to refer to it all that much.

For the second half of the program, Filter performed Schumann’s “Symphonic Etudes” in C-sharp minor (Op. 13). She showed a lot more freedom of expression in the first half of this long set of etudes and variations. The pieces had drama, but I wasn’t convinced of the overall arc of her interpretation. And again, in the midst of this complex work, and despite having the score in the piano, Fliter suffered a memory lapse that caused her to replay a phrase.

The finale was exuberant and grand, and the audience responded with loud applause, but they didn't jump out of their seats. Fliter returned and gave two encores: a Schubert “Impromptu” and another Chopin waltz.

Overall, though, I wonder what may be bothering Fliter. I heard her a year ago with the Oregon Symphony, and she was superb (see my review here), but this recital seemed subpar.
Posted by James Bash at 11:10 PM

Hi
I heard Ms. Fliter give the same recital in Madison WI and felt exactly the way you did. It gnawed at me the whole performance. Make no mistake, I adore her and will hear her in Milwaukee play the Schumann. I just hope she gets this recital together before the Wigmore and Paris performances.
You were kind not to mention the handfuls of wrong notes, to boot!!

I think that some artists have overtaxed themselves with too many concerts in their schedules. Then it affects their artistry negatively.

Too many concerts and memory takes it on the chin...