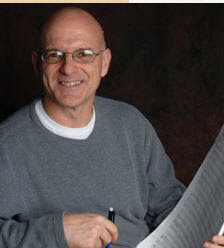 Composer John Paul, who heads the music department at Marylhurst University, has written a score for the silent film "City Girl," which will be shown at the Oregon Sesquicentennial Film Festival. The festival will show 10 films in ten days and " John Paul's score will accompany "City Girl" at 7 pm on May 8 at the James Ivory Theater, Villa Maria, on the campus of Marylhurst University. Tickets are $10.

I talked with John Paul a couple of weeks ago about this intriguing project.

How did you get to write music for a silent film?

John Paul: We at Marylhurst are hosting an Oregon Sesquicentennial Film Festival. The idea for the festival was ten nights of film that was connected to Oregon somehow. For example, the director was born here or the movie was filmed here. The curators and organizers of the festival, Dennis Nyback and Anne Richardson, have an incredible wealth of knowledge and they knew about this silent film called “City Girl,” which was shot in 1928 and released in 1930. It was filmed in the wheat country of eastern Oregon near a town called Athena.

Of course, the question with silent film is what are you going to do about the music. When silent films were released there was always live accompaniment. So I advocated for some homegrown music to be played by a local group. That would be in keeping with the thrust of the festival. So, I volunteered to write the music and get local musicians involved. And here we are!

So how do you go about writing music for this film? Do you watch it a few times and mull it over?

John Paul: Initially, I was worried that I wouldn’t like this film. But I watched a DVD of “City Girl” last summer and I liked it. I found the subject matter interesting. The story involves the market crash at the end of the 20s and the ensuing economic downturn. A farm boys goes to the big city and marries a waitress – much to the consternation of his dad. And how she is ill treated. But she is a strong woman and has an interesting character. I thought that I could do this.

I didn’t know silent movies all that well. I’ve seen the Charlie Chaplin and Buster Keaton, but I didn’t know drama. F. W. Murnau was the director, and the first film that he ever made, called “Sunrise,” won an Oscar at the first Academy Awards ceremony. In any case, “City Girl” was lost for many years because the studio wanted Murnau to make it into a Talkie, because silent films were becoming passé. But he refused. The studio modified it for sound later, but the silent version was lost for many years.

How did you figure out what instruments to use for the music that you’ve created?

John Paul: That was somewhat dependent upon time and resources. I know that we are going to show the film in a fairly small space that has only 90 seats and doesn’t have an organ or a piano. So I hit upon the idea of writing the music for string trio, and I thought of the Free Marz String Trio and of the fact that I’m a violinist. The idea of adding a clarinet also struck me as a good thing. So the music will be played by for instrumentalists. That should give some variety for 90 minutes, which is the length of the film.

There is the sense that the clarinet represents the city girl herself and its character has some jazzy-like things. The violin, viola, and cello sort of represent the home and warm-based. The film has four main characters and they each have been defined by an instrument – to some degree.

This works because I couldn’t have all four instruments playing all the time for 90 minutes.

Who are the instrumentalists?

How long have you been working on the score?

John Paul: I began in earnest on the day after New Years and with 90 minutes of music I realized that I had to average one minute of music every day, because I wanted to finish the score on April 1st, and that would give me a couple of weeks to do the parts. Some days I wrote more and some days less and some days nothing at all.

It was a great project. I had to figure out the sound I wanted, the tension level, and how it goes with the story. Sometimes I had an idea that didn’t work: so I had to come back to it later and find a better idea. There are some beautiful scenes that have almost no action at all – out in the wheat fields. Those are almost documentary in style.

I think that this film and concert would go over real well in Eastern Oregon.

John Paul: Yea, I've thought about that and am looking into a way to get the movie shown and music played there. Murry Sidlin took his version of Copland’s “The Tender Land” to the farming communities of Minnesota, and that was received well.

Best of luck with your premiere!

The Oregon Sesquicentennial Film Festival runs from May 1 to May 10. Opening night speakers are James Ivory and Gus Van Sant. For more information about the film festival click here.
Posted by James Bash at 10:20 PM

Composer John Paul sounds very talented. I can't wait to see the movie and hear what I'm sure will be a beautiful and well written score.