Zeller and Portland State Opera team up for hilarious Falstaff 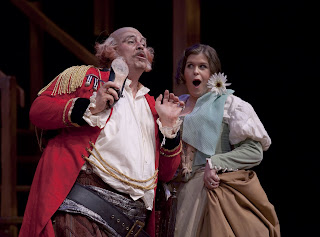 It might seem odd to place a seasoned professional in the midst of fine young opera singers who are still getting their ears wet, but Richard Zeller and the opera students at Portland State University performed Verdi’s “Falstaff” with gusto. Zeller, who has sung many times at the Met and other stages around the world, made the most of his debut in the title role, one of the choice plumbs for any baritone. His colleagues from Portland State showed some unevenness, but they more than held their own. As a result, the performance on opening night (April 13) at St Mary’s Academy (Portland State’s Lincoln Hall is still undergoing renovation) satisfied the senses.

Whether he sauntered about in a bathrobe or donned a dandy’s costume (with a huge Muskateer's hat and gaudy outfit), Zeller commanded the stage with his presence. He could easily throw his ample weight around but never carelessly. He always used it to his advantage, even when pursuing the fairer sex.

The richness of Zeller’s voice, as well as its agility and heft seemed to be tailor made for this role. The way that he could grumble, demand, accuse, and tease was spellbinding, and they were just a few of the vocal qualities that he employed in the first scene. But he topped it all with a cooing falsetto that almost tickled the ears.

On the student’s side of the ledger, Anna Viemeister gave a stellar performance as Mrs. Alice Ford, the primary object of Falstaff’s desires. Viemeister’s enticing soprano combined power and beauty to soar above the orchestra.

Michael Miersma was outstanding in the role of Ford, who as Alice’s husband tries to ensnare Falstaff. Miersma's shining moment came during a long aria in the second act when he sang of his jealousy. His baritone remained gorgeous even as he greatly increased its volume towards the end of the solo.

Lucas Tannous, a young professional tenor who sang in PSU’s production of “La Boheme” last year, created a passionate Fenton, the young man who is in love with Ford’s daughter Nanneta. Her character was charmingly sung by soprano Jennifer Davies.

In the role of Dame Quickly, mezzo Claire Craig-Sheets showed a superb sense of comic timing whenever she interacted with Falstaff. Other student singers who distinguished themselves in the cast were Alison Nordyke as Mrs. Meg Page, Michael Sarnoff-Wood as Doctor Caius, Jeremy Griffin as Pistola, and Carl Moe as Bardolfo.

The orchestra, conducted by Ken Selden, struggled at times with the Verdi’s challenging score, but they conveyed the spirit of the opera and supported the singers gallantly.

Tito Capobianco provided crisp directions that aided the storytelling. The near-seduction scene between Alice and Falstaff was a hilarious. Another very funny scene occurred when Falstaff wedged his body into the largest laundry basket in Portland. Near the end of the opera, when the villagers were mocking Falstaff, I thought that they might force him into a weight-watchers program, but fortunately no one was that serious, and we, in the audience, went home laughing.
Posted by James Bash at 5:17 PM