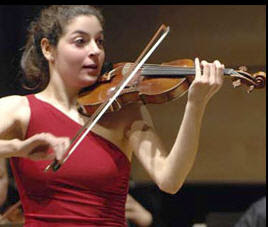 The concert began with Kilar’s “Orawa,” a very rhythmic and pulsating work that refers to the Orawa River and the mountainous region near the border of Poland and Slovakia. The constant musical motion of this piece and shifting key changes made it very easy to imagine water rushing around boulders and plunging down crevices. A few of the highlights included the thrumming sound of the violins before the rough-hewn exchange near the end of the piece when the ensemble picked up speed and the water rushed maddeningly. After the final chord, the audience (prepped by Bergman before the piece began) made a splash by yelling “Hej” (aka hey)!

The exuberance of that first piece was cooled off to a simmer by the somberness of the next work, Shostakovich’s “Chamber Symphony for Strings.” This work was originally composed by Shostakovich as his Quartet No. 8, but Russian conductor and violist Rudolf Barshai arranged it for chamber ensembles. Somehow the idea was spread that this work expressed Shostakovich’s fear and dread of fascism because of the bombing of Dresden during WWII, but scholars have determined that the music is intensely autobiographical and its despairing tone reflected Shostakovich’s suicidal mental state at the time when he composed the quartet in 1960.

More intensity from the Portland Chamber Orchestra would’ve helped to give this work more bite, but the ensemble did a fine job overall, and its principal cellist Katherine Schultz played soulfully during her solo passages.

Wearing a red dress, Deutsch backed up her dramatic presence with a finely honed performance of the “Summer” movement from Vivaldi’s well-loved masterpiece, “The Four Seasons.” It was fun to watch Deutsch turn to her fellow musicians and gamely challenge them to keep up with her during the fast sections that depict a violent summer storm. The orchestra could’ve played a little more cleanly, but it had plenty of vigor and esprit de corps to stimulate the audience which erupted in enthusiastic applause.

The concert concluded with Piazolla’s “Cuatro Estaciones Porteñas” (“The Four Seasons of Buenos Aires”), which is infused with the atmosphere of Argentinean tango yet also contains a number of quotes from Vivadi’s “The Four Seasons.” Deutsch put passion on the front burner and delivered her solos in full flambé style. She put a searing zing on the high notes and played the slow, sensuous passages with ardor. Several fine cello solos by Schultz added measurably to the evocative blend and the audience rewarded each movement with applause.

I had not heard the Portland Chamber Orchestra in many years, and I have to say that this ensemble has made tremendous strides in improving the quality of its sound. The PCO also took a big gamble to perform on Easter weekend, but it looked as if this concert drew over 300 people, and I noticed a lot of young people in the audience. So, hats off to the Portland Chamber Orchestra.
Posted by James Bash at 2:35 PM

A fabulous performance. I loved the diversity of the programming and Lindsay Deutsch is marvelously engaging, with her fellow musicians, the conductor and the audience.