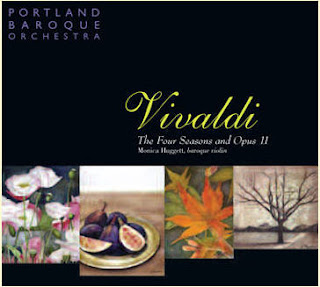 Just when you think that you’ve heard every conceivable rendition of Vivaldi’s Four Seasons, Monica Huggett and the Portland Baroque Orchestra prove you wrong by delivering a brilliant and unique interpretation of this beloved Baroque masterpiece in a recording that has just been released. And to top things off, The Four Seasons are just part of the package, a double-CD set that features six concerti from Vivaldi’s Opus 8 (which includes The Four Seasons), two concerti from his Opus 3, and all six concerti of his Opus 11. These are live recordings from concerts performed in 2005 (Opus 8) and concerts performed in 2007 (Opus 3 and 11), and each performance is crisp, fresh, and outstanding.

The first CD opens with concerti 1-4 of Opus 8 with Huggett as the soloist. In each measure of each piece, Huggett and the Portland Baroque Orchestra come up with new ways to envision the music. The changes of tempo and volume within phrases show how much Huggett and the instrumentalists of this ensemble know each piece like the back of their hands. The ensemble has a terrific way of making the sound dwindle down to nothing before the slashing rainfall in the Presto of Concerto 2 (Summer). Other great moments include the rough-hewn sound in Allegro of Concert 3 (Autumn) that evokes a barnyard and the almost itchy quality of the Allegro non molto in Concerto 4 (Winter). The exuberance in the last movement of Concerto 4 is unrestrained and wonderful.

Oboist Gonzalo X. Ruiz shines in concerti No. 9 and No. 12 from Opus 8. Ruiz, the PBO’s principal oboist since 1992, performs these pieces with a beautiful, mellifluous sound from top to bottom, and dispatches the quick, final movements of each concerto with élan.

The fist CD closes with two concerto from Opus 3 (Hamonic innovation). Violinists Carla Moore and Joli von Einem play the solos in Concerto No. 8 splendidly with a perfect sense of blending voices. Violinists Rob Diggins and Adam LaMotte collaborate with violincellist Joanna Blendulf for the marvelous solos in Concerto No 11. Again the blend of sound is outstanding.

The second CD contains performances of the six concerti of Opus 11. Huggett again displays a magical command of the solos in concerti 1-5, and Ruiz gives another outstanding performance in Concerto No. 6. Particularly arresting is the demonstrative and edgy beginning of Concerto No. 5, which contrasts sharply with the other concerti in Opus 11. (BTW: I reviewed PBO's Oct 19, 2007 performance of Opus 11 here.)

See the Portland Baroque Orchestra web site for information on how to order this recording. You won’t be disappointed.
Posted by James Bash at 11:02 PM

I finally got my copy of this in the mail as a gift for pledging to KBPS...it was worth the wait. I've been checking the mail every day for weeks now like a kid waiting for a present from Grandma.

This is definitely a bold and new interpretation of what is inarguably some of the most recognizable music in the baroque literature. While there were some renditions i liked better than others, the closing presto of Summer and the opening allegro of Autumn are so simply, purely and clearly stated that they're positively ecstatic without even trying to be. Marvelous stuff here; this is a gem. We're lucky to have such an excellent period orchestra in Portland. PDX rocks!