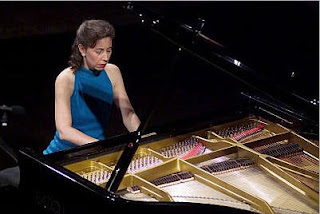 A full house greeted Angela Hewitt on Tuesday evening at the Newmark Theatre for the second of two recitals by the acclaimed pianist. Portland Piano International presented Hewitt in these concerts, which were part of her World Bach Tour in which she travels to 40 cities around world to play all 48 Preludes and Fugues from Bach’s Well-Tempered Clavier.

That anyone can memorize so many complex pieces is astounding, and the concert I attended featured 24 of these absorbing pieces, all of which were from Book II. Hewitt played the first 24 Preludes and Fugues from Book I on Sunday afternoon (see to David Stabler’s review of that concert).

On Tuesday, the audience buzzed like a beehive in anticipation of the concert, and everyone quickly welcomed Hewitt with a thunderous round of applause when she first set foot on stage. She rewarded us with a mesmerizing interpretation of the Prelude and Fugue No. 1 in C Major, and then she kept going and going into all of the other 23 Preludes and Fugues with an astonishing ability to give each piece an individual and personal touch.

The emotion range that Hewitt expresses with these pieces is incredible. You would think that Bach might be brittle and dried out, but his music in her hands is awe-inspiring. Hewitt has a wonderful ability to hold our attention by constantly varying the tempi or slightly emphasizing the right hand over the left on one phrase and then slightly emphasizing the left hand over the right on the next phrase. Some pieces had a noble sentiment then changed to pure joy. Others were more solemn and then changed to declamatory. Before coming to the concert I had prepared myself to be numbed with notes into some kind of Baroque stupor, but every piece seemed to have its own unique flavor and attitude, and together they seemed transcendent.

At just over three hours in length, this program was the longest that I had ever attended. Allowing for the 30 minutes of intermission between the first and second halves, plus a few minutes for Hewitt to partake of some liquid refreshment between sets, it still amounted to 150 minutes of piano music!

Topping off the concert, were ten pages of comprehensive and insightful program notes that were written by Hewitt. Hewitt’s glimpse into Bach’s life during the time of these compositions and her commentary on each Prelude and Fugue demonstrate her depth of learning and emotional involvement in Bach’s music. I had to ask for a couple of extra programs to give to friends who could not attend the concert.

In summary, I found this concert by Hewitt to be one of the most outstanding I have ever heard. The wow factor was off the charts.

Hewitt played the concert on a Fazioli grand. I knew from an interview I did with Hewitt (published in the Portland Tribune in 2001) that Hewitt prefers Fazioli pianos. So I called the Portland Piano International office to find out where they got this one. Lori Fitch, the operations manager at PPI, said that this Fazioli came from Baldassin Pianos in Salt Lake City, Utah, and that Baldassin was on hand to make sure that it was tuned perfectly. This was probably the same piano that Jeffrey Kahane uses at the Oregon Bach Festival. (Kahane is another Fazioli advocate.)

Hewitt is featured on a new DVD in which she talks about Bach. I haven’t seen the DVD yet, but you might want to catch Jens F. Laurson’s intriguing review on the Ionarts blog.

Also, I found an absolutely amazing interactive explanation of the fugues of Bach’s Well Tempered Clavier at this web site:
http://www2.nau.edu/~tas3/wtc.html

It requires shockwave to be installed on your computer, but it’s all worthwhile because you can watch the development of the music as it is played. Here’s a sample graphic to wet your interest: 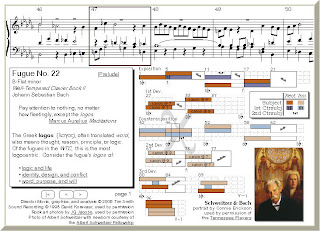