Kalmar to lead the Oregon Symphony through the 2012-2013 season 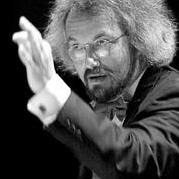 The Oregon Symphony announced today that Carlos Kalmar has signed a contact extension to lead the orchestra as its music director for another four years. This is great news! Kalmar has led the charge in improving the quality of the orchestra and has challenged its members and the audience with many exciting, new pieces and guest artists.

By stepping into new territories, the orchestra has been forced to rebuild its audience, and I've seen a fair amount of success this year. The blend of audience favorites, in terms of musical selections and soloists and some new pieces in next season's programs should put the orchestra on more solid financial footing.

Now that Kalmar will be around for a few more years, I hope that people can step forward to help finance a recording. The orchestra has yet to produce a recording under Kalmar's tenure. Let's not let another four years go by without one. In the meantime, congratulations to Kalmar, the orchestra, and the orchestra board for continuing with Kalmar.
Posted by James Bash at 10:25 PM