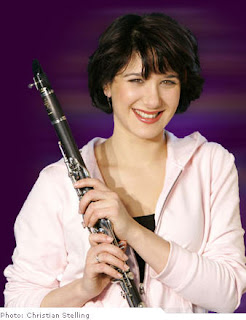 The Oregon Symphony displayed an enjoyable variety of orchestral color in their most recent concert series. For starters, the string sections of the orchestra were divided in half for Béla Bartók’s Music for Strings, Percussion, and Celeste. Then virtuoso Sharon Kam made her debut with the orchestra as the soloist in Mozart’s Clarinet Concerto. And finally, the large version of the orchestra to performed Richard Strauss’ Suite from Der Rosenkavalier. I heard the Sunday evening performance and left the concert hall with some spring in my step.

I’m almost getting used to seeing Oregon Symphony split into two chamber ensembles. Just a month ago the orchestra played Johann Christian Bach’s Sinfonia in a double-orchestral setting. This time, the Bartók piece called for two string orchestras to be positioned on either side of a percussion battery that included a piano and a xylophone.

From my own singing experience with the Portland Symphonic Choir, I know that the Schnitzer’s stage is far from optimum when it comes to hearing across the stage. Yet the way that these ensembles performed Bartók’s work was marvelous. It’s a real credit to how well the musicians listen to each other and how well Carlos Kalmar keeps them together. Bartók is well known for switching meters and asking for dramatic changes in dynamics. His music is always challenging on many levels, and the orchestra rose to conquer those challenges with gusto.

One of the fascinating things occurred in the first movement when it seemed to take forever before the first violin section in Orchestra 1 got to play any notes at all. I supposed that only three minutes passed by, but it seemed (at least visually) to add some tension to the music. However, the music was extremely meditative, and I heard (and saw) a slow build up of sound as more and more sections of strings joined in. It was like watching someone make a multilayered cake on a very calm afternoon. Then after all of the strings were sawing together, they made a terrific crescendo as they played down the scale.

Each movement contained unusual sounds and instrumental combinations. The second movement, for example, had a passage that paired the timpani and bass fiddle. The third movement began with pensive notes from the xylophone that helped to create a mysterious atmosphere, but then the timpani would create a tone that changed pitch, which seemed really odd and almost comical. The fourth movement had a joyous, dancelike quality, and the piano (played wonderfully by Carol Rich) added a jaunty yet slightly mocking feeling to the whole effect. Overall, the orchestra created a rich, and satisfying soundscape that I would love to hear them play again.

Then after intermission, guest artist Kam came out on stage with her basset clarinet to perform Mozart’s Clarinet concerto in A major, K. 622. The basset clarinet is longer than a normal concert clarinet, because it has additional keys that extend its lower register.

Kam gave the concerto a silky, smooth sound that worked well throughout the piece. I loved her elegant, lithe phrasing in the first movement, and there were tender and quiet moments in the second movement in which her low notes seemed to come out of nowhere. She finished the third and final movement with a joyous and yet elegant sound that seemed perfect to me.

A friend of mine said that he almost became dizzy while watching Kam play, because she puts the clarinet in constant motion. It’s sort of a swirl that is a bit distracting, but it also made me wonder how she can make such beautiful sounds at all.

I also loved the way that the orchestra played with her. The ensemble has never played Mozart better, and the collaboration of Kam, Kalmar, and the orchestra received a standing ovation.

On Monday evening at the Portland Symphonic Choir rehearsal, I talked with fellow Northwest Reverb writer Lorin Wilkerson about the Mozart piece. Wilkerson felt that Kam played it way too evenly… so evenly, in fact, that it lacked a pulse. So he was disappointed. But he was sitting under the balcony, which may have affected his response to the piece.

The concert ended with Strauss’ magical themes from his opera, Der Rosenkavelier, in an arrangement by Arthur Rodzinski (music director of the Cleveland Orchestra 1933-1943, the New York Philharmonic 1943-1947, and the Chicago Symphony Orchestra 1947-1948). The horn section sparkled from the outset in the Oregon Symphony’s performance, inspiring their colleagues to deliver a thrilling ride. Many of the orchestra’s principals played with much polish, including French hornist John Cox, trumpeter Jeffrey Work, oboist Martin Hebert, and concertmaster Jun Iwasaki. Kalmar deftly slowed down and sped up the tempi in the waltzes and also pulled back the sound very nicely – all of which created a delightful atmosphere and evoked images from the opera. This was great way to end the evening.

Notes about the audience: Sunday night was very full, which was a pleasant surprise when you take into account the warm weather that we experienced.

At the Saturday concert, Wilkerson sat almost behind the man who yelled at Elaine Calder. See Charles Noble’s blog for more on this incident. Wilkerson was pretty sure that it was the same fellow who yelled more or less the same thing at a previous concert. That man seems to be on a mission to destroy public appreciation for the big-time donors who make these concerts possible. If I meet him, he will get an earful.
Posted by James Bash at 6:13 PM

I didn't mean to take anything away from Kam's technique, which was spectacular. The way she manipulated the conversation between the delicious low register of the basset instrument and the higher voices of the clarinet was spectacular; it sounded like a seamless dialogue between two different reed instruments.

I think my problem was more with interpretation. While sitting under the balcony may have affected the acoustics somewhat (i thought the orchestra sounded uncharacteristially timid during sizeable portions of the first and third movements), it was the dragging of the tempo, especially in the third, that got to me. I felt the soloist employed so much rubato at certain points that the pulse was indeed lost (though never irretrievably so), and I like my Mozart with a good strong heartbeat. I thought the adagio was heartrendingly beautiful, but the allegros left me wanting. Maybe that's picky, but hey, a critic can't like everything, right?

About the boor who had the rudeness to yell out during the opening announcements, (and I'm only speaking for myself here) it seems like there are three simple choices: 1: Pony up the cash yourself and sponsor a concert and then request that they don't publicly thank you. 2: Realize that the symphony is very dependent on corporate underwriting and keep quiet and let the rest of us enjoy it, or 3: Stay home!