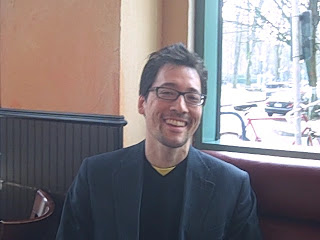 Ken Selden, music director and conductor of the Portland State University Symphony Orchestra, will lead the orchestra in a concert with the internationally acclaimed pianist Orli Shaham this Wednesday at 8 pm at Kaul Auditorium. They will play Olivier Messiaen’s “Oiseaux Exotiques” with Shaham and will also perform the Oregon premiere of Franghis Ali-Zade’s “Crossing II” and Felix Mendelssohn’s “Italian Symphony.” The cost is $15 for adults, $10 for seiniors, $8 for students, and free to those with PSU or Reed College ID.

Since his arrival at PSU, Selden has picked up two national awards (from ASCAP) for adventurous programming in the university/conservatory division. That’s quite an accomplishment for PSU and its music department.

It’s pretty amazing that you can get internationally acclaimed artists to come and play with your orchestra. How do you do that?

Selden – It's definitely unusual for artists of this caliber to be performing with a university orchestra. In this case, we're talking about musicians that I've worked with in the past, or have a close connection with, through mutual friends. The first year I was here we invited Awadagin Pratt, and last year we worked with Matt Haimovitz. We talk to the soloists and see if they're interested in the project we're doing. The funding for bringing them here comes from the Instrumental Music Club, which is a student-run organization at PSU that is funded by general fees.

Orli Shaham has played the Messiaen piece before with the Baltimore Symphony and other orchestras. When I spoke to the students about someone we could bring, they were interested in "Oiseaux Exotiques" and in her. In some cases, we might speak to an agent to see if that artist might have an interest in our project. Orli Shaham travels quite a bit, and during the summer she was on tour in Australia with her husband. Both were playing with different ensembles at that time. We couldn't reach her on the road, so we had her agent ask her, and she said yes! It's unusual for a university orchestra to play Messiean, so that must have appealed to her.

So the Instrumental Music Club takes care of Shaham’s fees?

Selden – Yes. Most universities have resources for student organizations and usually the funds go to sports and social activities like dances. But PSU has shown a lot of enthusiasm to support the Instrumental Music Club. Before I joined the PSU faculty, I had heard that the club brought Janos Starker here for master classes. That really attracted my attention. So, I wanted to expand that to concertos, and bring the orchestra up to a level that would allow for collaborations.

In addition to guest artist fees, it also costs a lot of money to rent new music, which is maybe why university orchestras tend to stick to standard repertoire. Fortunately, our department chair Bryan Johanson, who is a composer as well, has supported my interest in new music. I've found a lot of good things happening here. PSU started a music education degree about three years ago and that has already been very successful. The concerto competition winner this year, for example, is a music education student. We continue to develop our performance programs as well.

Selden – This Azerbaijani work is by a composer who was discovered by the Kronos Quartet. Ali-Zade has performed as pianist with the Kronos Quartet and has composed several pieces for them. Her music combines flavors, it's Azerbaijani in one sense - with a middle eastern flavor. This piece has a drone with a dissonance set up against it, and it has rhythmic passages that are in the contemporary style of classical music. If you listen to some traditional Azerbaijani music on YouTube you can hear these connections. "Crossing II" is for a small ensemble with just one person on every part, but you?ve got the ability to create orchestral tutti gestures as well.

In the first part of this piece, Ali-Zade writes a dotted line for every second. You might have a series of notes that are placed in there or sustained through that second. The conductor measures how many seconds are going by, and then you place your note during that period of time. The second part of the piece is more rhythmical. She does not write bar lines, just music, and the conductor gives the pulse. The ensemble plays rhythmic patterns within that pulse. Some are in unison and some in counterpoint, but it?s in very irregular meters. Other sections are more metered. There?s a dreamy quality to the beginning and end, where the harp joins in. In describing this piece, Ali-Zade has used metaphors like rivers and crossing borders. It's an imaginary landscape. I'm excited to be doing this piece for the first time.

In choosing contemporary repertoire, I look to see what is being performed by major orchestras around the world and in the US, and try to figure out what hasn?t been done here. We are finding that a lot of people are interested in hearing these works. We were the first in Portland to perform Magnus Lindberg?s "Coyote Blues" and the "Chamber Symphony" by Thomas Adès. Both are fantastic pieces that have been played all over the world but never here.

Tell us about Messiaen’s “Oiseaux Exotiques.”

Selden – Messiaen wrote this piece after he became obsessed with the sounds of birds. "Oiseaux Exotiques" belongs with other pieces that Messiaen wrote for his wife, Yvonne Loriod, in concerto style, and I think that they are his most important contribution to the repertoire. He wrote these pieces for solo piano and winds, brass and percussion, and left out the strings. The strings seemed to become less connected in his mind to the birds. Every ten years or so he would write a new piece with this instrumentation. These are very important works because he would explore how to combine, in counterpoint, the sound of birds. In "Oiseaux Exotiques," there is incredible interaction between various birds from all over the world that would never be in the same place in nature. He would transcribe bird songs while sitting in a field or forest or from recordings. He would combine them in the way that other composers would combine motives, and created a brilliant landscape of birds. It's an amazing piece.

This concert is called "Supernatural." It's not about the depiction of a familiar natural landscape, but something more vivid and fantastic. With Messiaen he is transforming the bird sound and creating a brilliant musical texture. You?re not supposed to identify certain birds when listening to the piece. It?s more about musical exploration. When I went to college, I wasn?t interested in this music at all, but one day much later it struck me and now I try to do Messiaen everywhere I go. It can open up a new world for people.

And you’ll finish the concert with the Mendelssohn.

Selden – It will be interesting to hear Mendelssohn after hearing the other pieces. I like the idea of people coming off the street and into the concert hall and hearing contemporary works and then later in the concert going backwards in order to hear a piece that was created much earlier. I think that listening to contemporary pieces first help to refresh and clear the mind. Then you're ready for some Mendelssohn.

I’ve never experienced a concert that way before. It will be interesting to see if it works.

Selden – Great! See you at the concert!

Orli Shaham is giving the master class on Tuesday night at 7 pm ESB 183. It’s not a big room, so it might be packed. The instrument club selected the students that will play during the master class. Orli Shaham with to Juilliard pre-college and to Columbia University and hosts a classical music radio program in Los Angeles.
Posted by James Bash at 1:28 PM