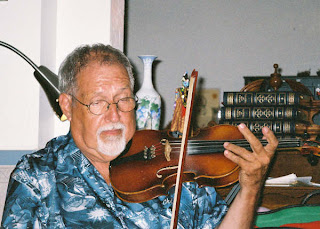 A memorial Concert for Cline Otey will be held on Sunday, March 1, 2009 at 3:00pm, St. Anne's Chapel, Marylhurst University, 17600 Pacific Highway (Hwy 43). The concert will feature Otey's family, friends, colleagues and students and will benefit the music therapy program at Marylhurst.

According to Otey's daughter, Lisa Otey, enjoyed a musical career for nearly 40 years in the Portlandarea. He played violin in the Oregon Symphony and the Portland Opera, was assistant conductor to the Portland Youth Philharmonic and taught thousands of children in the orchestras of North Clackamas School
District.

"Music was my father's life," said Lisa. "The only thing more important to him was children. He spent his career nurturing and inspiring the talents of his students and his own family."

Otey passed away on Aug. 5, 2008. Lisa Otey mentioned that one of his passions at the end of his life was music therapy. He longed to bring music into children's hospitals. Even when he spent a short time in a nursing home, he played for the residents and brought healing to their lives.

"I am most interested in finding m dad's former students," stated Lisa. "I have found some online but am at a disadvantage, living in Tucson, Arizona, which is so far away from Portland. It would mean so much if you could list the concert and also a call to his students if they wish to articipate in the concert. They can reach me at lisa@owlsnestmusic.com, www.lisaotey.com and 520.370.5912. It is my dream that this will become an annual event to keep my father's memory and legacy alive."