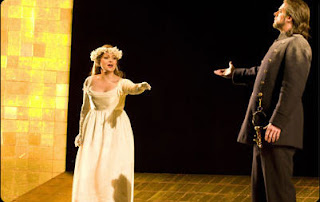 Seattle Opera certainly went out on a limb to produce Béla Bartók’s “Bluebeard’s Castle” and Arnold Schoenberg’s “Erwartung” (“Expectation”) for the first time in the company’s 35 year history. Both operas have a stark, expressionistic bent that could have fallen flat on its face on opening night (Saturday) at McCaw Hall. Yet each opera delivered a team-effort, combination punch that was a knock-out musically and visually. Overall, this daring double-bill production pushed Seattle Opera forward artistically and exposed new horizons for the company.

The danger in producing operas by Bartók and Schoenberg loom large, because both composers wrote music that the public has not embraced wholeheartedly. Bartók’s “Bluebeard’s Castle” (composed in 1911) veers towards atonality, yet has enough modal tonality to make it appealing. Schoenberg’s “Erwartung” (composed in 1909) is atonal and accosts the ears with all sorts of dissonant sonic textures. Fortunately, Speight Jenkins and Seattle Opera engaged the right mix of artists to make these two one-act masterworks intelligible and engaging for today’s audiences.

Seattle Opera featured exceptional casts for both productions. Baritone John Relyea superbly conveyed the complex personality of the forceful, anguished, and enigmatic Bluebeard. Soprano Malgorzata Walewska was completely convincing as Judith, his new bride who gets a tour of Bluebeard’s home and in the process unlocks all of the doors to his terribly-burdened soul. Relyea and Walewska used their powerful and expressive voices to reveal the vast expanse of emotions within each character.

In “Erwartung,” Susan Marie Pierson was totally convincing as a woman who became unhinged in her struggle to make sense of her lover’s death. Pierson’s soprano voice completely matched her haunted state. She drew the audience into her dream world with utter conviction. How she found the right notes within the dissonant landscape of Schoenberg’s music was an astonishing mystery in itself.

Conductor Evan Rogister made the most of his debut with the Seattle Opera orchestra, skillfully letting the music breathe on its own. In “Bluebeard’s Castle” the symphonic portions of the music can almost take over the opera. In “Erwartung,” the orchestral music supports everything (tangible and intangible) in all sorts of unusual ways. Rogister and the orchestra found the emotional arc of the music and gave it a perfect shape.

Both operas were originally created for the Canadian Opera Company in 1993 by Robert Lepage, who has successfully directed productions for Cirque du Soleil and is currently spinning heads with his conception for “The Damnation of Faust” at the Metropolitan Opera. For Seattle Opera’s production, stage director François Racine, who has worked with Lepage, provided fluid instructions that enhanced the story lines. In particular, the three silent actors in “Erwartung” used slow-motion gestures and acrobatics to stunning effect. An illumined hand reaching out, a bed sheet deftly stripped away, a psychiatrist sitting on a chair that was parallel to the stage floor and supported on the side of the wall (his plane of reference was rotated 90 degrees from the woman who was on the stage floor) – all of these actions supported the chaos going on in the woman’s mind.

Robert Thomson’s lighting for both operas was brilliant. In “Bluebeard’s Castle” light spilled out of the doors that Judith opened and flood the wall on the opposite side of the stage with evocative colors. In both operas, an extended wall took on different textures and meanings because of the facile lighting. Also, the gigantic picture frame, which framed both operas, changed color. In “Bluebeard’s Castle,” the color changed impressively from bright gold to a tarnished version of gold.

“Bluebeard’s Castle” and “Erwartung” are linked to Expressionism, which reached a high-water mark in the early part of the Twentieth Century, when Europe was on the verge of great turmoil. In light of the current economic downturn, perhaps Expressionism will experience resurgence. At Seattle Opera, Expressionism, through the music of Bartók and Schoenberg, is being realized at its fullest.

Extra note: Because I was a fellow in the NEA Institute for Classical Music and Opera, I attended the Metropolitan Opera production of "The Damnation of Faust," which was directed by Robert Lepage and featured Relyea as Méphistophélès. I wrote a review of the performance here.
Posted by James Bash at 12:07 AM

Thanks for the great review!

When you get a chance, check out the new and improved Seattle Opera Blog!