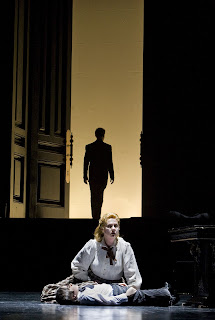 Portland Opera ventured into the grim psychological territory of Benjamin Britten’s “Turn of the Screw” with much success on Saturday evening at Keller Auditorium. An exceptional cast, led by soprano Brenda Harris as the Governess, captured the haunted and emotional turmoil with incisive singing and acting. Stage director Nicholas Muni, who created the original concept of this production for Cincinnati Opera, did a marvelous job of leaving the story with its labyrinth of ambiguity, although I still blame the ghosts for the malevolence.

Harris deftly conveyed a person who was tormented by her situation. When showing resolve and courage, she sang with flinty determination and a clarion projection. When collapsing in anguish and frustration, her voice had a soft, melting quality that was perfect.

Judith Forst, in her role as Mrs. Grose, created the overwhelmed housekeeper brilliantly with a riveting soprano voice and convincing acting. As Flora, the young girl who gets caught up in the conniving actions of her brother, soprano Joélle Harvey was superb. She tone could be charming and innocent at one moment, and then devious the next. The scene in which she vengefully rebuked the Governess was stunning.

Tenor Ryan MacPherson’s made a completely convincing evil presence as Quint, and his voice dripped with all sorts of succulent sounds that lure others to their doom. Soprano Mary Phillips as the ghastly Miss Jessel was also creepily believable in tone and action.

As Miles, Michael Kepler Meo, struck the right sense of jaded attitude – a sort of evil Harry Potter. Although he is only ten years old, Meo more than carried his own weight as a singer. His treble voice had a pure, yet slightly resonant tone that carried well and he often added some power to it. Tenor Brendan Tuohy sang the role of The Prologue impeccably, and he looked like a Miles who had grown up rather than died, which was sort of spooky in its own way.

All of the principals sang with precise diction, making the supertitles unnecessary (except when two different texts were sung at the same time).

Conductor Christopher Larkin provided crisp direction to a chamber orchestra of only thirteen players. Percussionist Gordon Rencher gave a particularly outstanding performance in the way that he handled a myriad of tones and rhythms.

The overly large chess set near the front of the stage was an excellent metaphor for this drama, because the main characters relentlessly tried to checkmate each other. All of the action took place in an expansive room with dark curtains extending from ceiling to floor and a series of steps that led to some exceedingly tall doors (worthy of an NBA player) placed dead center in the back. The height made Quint’s descent between the folds of the curtains very impressive.

This production used an ensemble of 40 supernumeraries as servant ghosts of the mansion. Their presence added marvelously to the haunted atmosphere.

With “The Turn of the Screw,” Portland Opera brought a Benjamin Britten opera to its main stage for the first time. Over the past few years, Portland Opera’s young artists program gave outstanding performances of “The Rape of Lucretia” and “Albert Herring” at the more intimate Hampton Opera Center.

The uneasy story line in “The Turn of the Screw” and Britten’s jarring music elicited an unusual cacophony of coughing in the audience – especially in the first act – or else the hackers decided to inflict their colds on their neighbors. Perhaps they were affected by the cold-blooded Quint…
Posted by James Bash at 10:30 PM