Met Opera's new film, "The Audition" takes you behind the competition finals 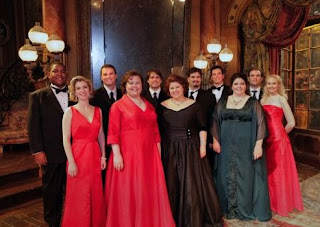 It’s always interesting to get behind the scenes in a high-stakes event, and in the world of opera the finals of the Metropolitan Opera National Council auditions has to rank as one of the most pressure-packed contests of all. How do singers prepare themselves? What are they feeling? How do they behave in front of their rivals? Well, you can find out, because a new feature-length documentary, “The Audition,” takes you back stage and gives you a glimpse into the lives of several singers who participated in the finals of the 2008 Metropolitan Opera National Council Auditions. Although “The Audtion” is being released this weekend at 400 movie theaters around the nation, I got the opportunity to watch the entire film ahead of the release date, and I can tell you that it is riveting.

After some short introductory remarks by Renée Fleming, Susan Graham, and Thomas Hampson (all of whom won the National Council Auditions), you quickly dive into the last week of the competition when the 22 finalists are paired down to the final eleven. From that point onward in the story, it is fun to try to figure out which singers will win the final prize of $15,000 and the possibility of singing in a Met production. You also get to see some of the techniques of the Met’s vocal coaches and listen to the jury discuss the singers.

For those of us in the Pacific Northwest, we can watch the progress of soprano Angela Meade, who is a native of Chehalis, Washington and picked up her BA at Pacific Lutheran University. Also, Speight Jenkins, general director of the Seattle Opera, makes a cameo appearance near the beginning of the film while talking with Peter Gelb, the general manager of the Met.

One of the biggest gambits is taken by tenor Alek Shrader, who uses the finals week to learn and perform “Ah! Mes Amis,” the aria with the nine high Cs from Donizetti’s “The Daughter of the Regiment.” Just when you start pulling for him, you can get swept up by the story of African-American tenor Ryan Smith, who had stopped singing for three years, because he couldn’t financially afford the lessons.

The film runs over two hours and includes highlights from the arias that the finalists sang with the Met Orchestra. An additional twenty-minute segment includes reminiscences and reflections by Fleming, Graham, and Hampson. The pace of the documentary and the quality of the filming are superb, so you have the feeling that you were there.

“The Audition” opens this Sunday in Oregon at high noon at the following locations:

If you want to see a preview of the film, click here.
Posted by James Bash at 4:34 PM

Ryan Smith's story is quite remarkable. I was saddened to learn of his death last November, after a six-month battle against lymphoma.