Fear No Music goes way out on a limb – once again 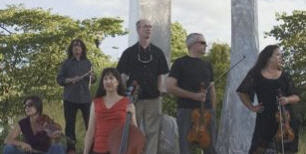 The Fear No Music ensemble has no qualms about tackling unusual music. On Friday evening (September 16) at the Colonial Heights Presbyterian Church, the Fear No Music musicians performed some very eclectic numbers that loosely paid homage to other composers, ideas, or something vaguely intangible. The music stretched the ears of the audience with all sorts of intriguing sounds from a wide palette of, mostly, contemporary composers, including George Crumb, Kaija Saariaho, Charles Ives, Elliott Carter, Stephen Hartke, and Michael Daugherty. Some audience members might have left the concert scratching their heads… but in a good way.

The concert opened with “Four Nocturnes” by George Crumb. Played by pianist Jeff Payne and violinist Inés Voglar, this piece had a fragmentary nature that explored sounds of the night. Voglar rapped on her violin, created whispery sounds and brief single-note phrases. Payne knocked the side of the piano and stood over its strings to strum them or suddenly pounce on a cluster of strings. That was just a little bit of what happened in this piece, which might have been Crumb’s version of “Eine Keline Nacht Musik.”

Next came Kaija Saariaho’s “Nymphéa” (water lily) for string quartet and electronics. This amplified piece (performed by violinists Voglar and Paloma Griffin, violist Joël Belğique, and cellist Nancy Ives) began with some high pitched sounds from the violins and an electronic noise that seemed akin to snoring. That morphed to thicker and more interwoven textures from the string quartet which nicely feathered away at one point. The piece also had wordless vocalizations from the quartet and ended with ferocious wailing from the instruments. So Saariaho’s lilies didn’t leave the stage with a whimper.

Charles Ives’s “Hallowe’en” for string quartet, piano, and bass drum offered a refreshing contrast to the Saariaho number, because it had a more light-hearted atmosphere. In a preparatory remark, Belğique explained that the strings would play in different keys, and it was really delicious to hear the sound of the quartet as they played passages that ascended and descended all over the place. With Vajda walloping the bass drum the piece achieved a Walpurgis Night atmosphere that was too brief. I would really like to hear this piece again some day.

The Ives was followed by Elliott Carter’s “Figment No. 2: Remembering Mr. Ives” for solo cello, which was played evocatively by Nancy Ives. This music didn’t have the random and severely abstract nature of other pieces by Carter that I have heard before. It growled more deeply and had more emotion, and was a pleasure to hear.

To change things up completely, violinists Voglar and Griffin performed the strikingly bluesy “Oh Them Rats Is Mean in My Kitchen” by Stephen Hartke. Voglar and Griffin played with verve and the near unison passages near the end were dynamic and blues-filled at the same time.

The concert concluded with Michael Daugherty’s “Paul Robeson Told Me” for string quartet and tape. This very unusual piece featured the voice and singing of Paul Robeson from 1949 when he was in Russia. In the first part of the piece, Robeson spoke in Russian and sang the ‘People’s Battle Song” while the “live” musicians accompanied him lightly. That nicely set up the second part of the piece, which was all-instrumental and filled with strong emotions. The FNM ensemble played this segment with hard driving fervor that finished in a tempest of sound.
Posted by James Bash at 12:04 PM