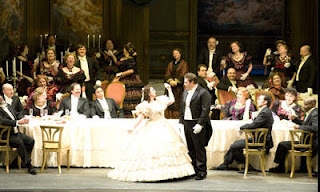 Seattle Opera’s production of Verdi’s “La Traviata” could’ve used a dash of élan on opening night (October 17) at McCaw Hall. The performance with its opulent scenery and costumes glittered, but the music-making didn’t match up with the energy needed for the party scenes so that they didn’t contrast all that dramatically with the slower tragic parts of the opera when the principal singers were at their best. Strong performances by Nuccia Focile as the consumptive courtesan Violetta Valéry, Dimitri Pittas as her lover Alfredo, and Charles Taylor as his father Giorgio Germont made this “La Traviata” a rewarding experience even though it could’ve been much more.

During the first act, Focile’s voice kept going sharp and she seemed to work too hard for the high notes towards at times. She avoided the high E-flat at the end of “Sempre libera,” which might have disappointed opera goers who didn’t read her explanation in the program that sopranos have inserted that note over the years. Her voice seemed much steadier for the remainder of the opera, and she convincingly portrayed the emotional turmoil of the heroine.

This performance marked the Seattle debut for Pittas. His Alfredo was a bit wooden, but he his tenor voice sounded golden. With more edge in his voice, he will bring out more emotion in his conflicted character. In the role of Giogio Germont, baritone Charles Taylor brought down the house a couple of times with his very emotive, expansive, and flat-out beautiful singing.

Among the other principals who sang with distinction were Barry Johnson as the Baron Douphol, Sarah Heltzel as Flora Bervoix, Leodigario del Rosario as Gastone, Jonathan Silvia as the Marquis d’Obigny, Byron Ellis as Dr. Grenvil, and Emily Clubb as Annina.

Under the baton of Brian Garman, the orchestra sounded sluggish and uncertain now and then. The party scene in the first act needed more sparkle and playfulness from the orchestra. Even the chorus didn’t have its usual luster. Garman is the music director of Seattle Opera’s young artists program, and this was his debut performance on the main stage. Things are bound to get better for him.

The stage direction by Mark Steshinsky set out in fine fashion with a slow-motion pantomime during the overture which showed how beautiful and trapped Violetta was. Highlights of the performance included Fociles’ singing and walking atop a banquet table and the interaction between the principals with the freeze-frame partiers in the background. However, at the very end of the opera when Violetta collapsed and died, Alfredo just looked at her in bewilderment. He didn’t rush to her side and the elder Germont seemed to gaze on Violetta’s demise almost approvingly. This created a striking tableau as the curtain fell, but the emotion was cold.

The set and costumes from San Francisco Opera were of the period and wonderfully framed the opulent life-style of high society in Paris of the 1850s. The lighting by Connie Yun was outstanding during the entire performance.

I didn't see this production but I've been consistently impressed with Yun's lighting in other productions. From the cover of the Seattle Opera magazine, it looks as if the set might have been the same ghastly, red velvet monstrosity that the Portland Opera used last year. That didn't work for me so well...

Over the decades I have come to view Papa Germont as a seriously ambiguous character, at best calculating and manipulative, at worst downright toxic.

As I was growing up, the commentary on him centered on the beautiful father-daughter relationship that develops between him and Violetta, so typical of all the great Verdi father-daughter pairings. I don't buy it. He comes on the scene to break up her liaison with Alfredo; despite learning of her new nobility of purpose he plays expertly on all her insecurities, predicts that he'll abandon her as she ages, and drives her back to the life she's assured him will kill her. And he walks out after making certain he's achieved his goal.

NOT a sympathetic character at all.

Those are excellent points. I've seen that character done with a softer and with a harder edge. I agree that the harder one is truer.