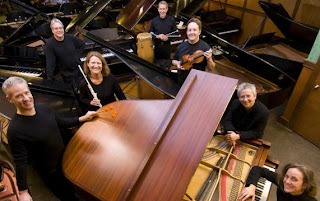 There’s a huge landscape for new music in China, and the Third Angle New Music Ensemble explored a bit of that territory in an exciting concert on Friday evening (October 24) at the Fields Ballroom in the Portland Art Museum. That landscape (both external and internal) is being discovered and given a voice by Chinese composers who are fusing sounds from the East and West in exciting ways. Third Angle found a way into the heart of these sounds and delivered intriguing performances of music by Chen Yi, Jia Daqun, and Ye Xiaogang. To make the concert even more special, Xiaogang was present, as was special guest soloist, the zheng virtuoso Haiquiong Deng.

The first piece on the program was Chen Yi’s “Yangko,” which begins with rhythmic and percussive vocalizations by three performers: violinist Ron Blessinger and percussionists Niel DePonte and Jeffrey Peyton. A free-spirited passages for violin gradually takes over and becomes interwoven with sounds from hand-sized cymbals, castanets, drums, and, and gongs. It all evoked the Yangko, a major folk dance form from northern China, and it was easy to picture the dancers as the wended their way through the countryside.

The next piece was “San Die” (“Three Variations”) by Ye Xiaogang for flute and zheng. The zheng is a 21- or 26-string plucked instrument with moveable bridges for each string. From a distance, it looked like a dulcimer gone wild, but in the hands and fingers of Haiquiong Deng it was poetry.

The piece started slowly with flutist GeorgeAnne Ries playing a vaguely melodic line that was interrupted by notes from the zheng. The piece had lots of variety, but the zheng with its range from twangy to spiky was fascinating to hear. The quiet swirls between the flute and zheng were arresting and the piece ended with a positive upswing that put a smile on everyone’s face.

Next came “Colorful Sutra Banner, which Xiaogang wrote after visiting Tibet and becoming inspired by the banners he saw. This piece had a lot of playful exchanges between violinist Blessinger, cellist Cheifetz, and pianist Susan Smith. The delicate and tender sections at the beginning gave way to sturdier and march-like music that culminated with loud, percussive pluck.

The first half of the concert concluded with “Flavor of Bashu” by Jia Daqun, a work that creates the excitement of music from Chinese opera. This piece featured violinists Blessinger and Daniel Feng, percussionists DePonte, Peyton, and Brian Gardiner, and pianist Smith. The music was thrilling, chilling, and spilling that made me want to see some performers leap about the stage. The second part (called “Veins in rock”) featured some extremely furious sawing from the violins (both amplified) and at one point sounded like riders on horseback fading into the sunset.

After intermission Deng performed a traditional solo for zheng entitled “River Frolic in the Wintry Water.” With amazing dexterity Deng created a wonder palette of sounds. Some were quick and trickling and others were feathery light. Some slid from tone to tone and others wiggled. The fast sections were mesmerizing.

Ries, Blessinger, Cheifetz, and Smith played Xiaogang’s “Datura,” a piece that changed moods sharply from contemplative to dramatic and intense before ending quietly. The program notes explained that Datura is common houseplant in southern China that “can be used as a hallucinogen, usually with unpleasant results.” So the music may have directly reflected the affects and effects of this plant in a very broad sense.

Deng returned to play “Springs in the Forest” by Xiaogang. This virtuosic work for the zheng flitted about from elegant, melodic lines to short and long phrases with raspy or zingy qualities. The ending was wild and filled with a positive, uplifting spirit..

The concert ended with “Sparkle” by Yi for eight instrumentalists (Ries, Blessinger, Cheifetz, Smith, Peyton, Gardiner, clarinetist Todd Kuhns, and bassist Jason Schooler) who were directed by DePonte. The meter in this piece seemed to change constantly and DePonte was busy cuing throughout. I enjoyed the short glissandos from the bass, the tension in the piece, the melodic snippet for clarinet, the punctuations by the piano, the vigorous passages in which all of the instrumentalists seemed to be chasing each other sonically, and the dramatic ending with a brief tag from the flute. This was a great way to bring the concert to a close, and the audience seemed to be abuzz with all of the new sounds.
Posted by James Bash at 10:47 PM