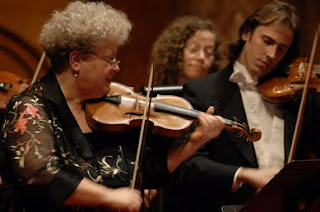 The sound of a loud pop greeted the audience at the Portland Baroque Orchestra concert on Saturday evening (October 24) at Kaul Auditorium. It also surprised violin virtuoso Monica Huggett, because she just broke her E string about five seconds after beginning the first piece. After halting the orchestra, Huggett excused herself for a few minutes in order to attach a new string, and the audience got a chance to take a quick breather and reflect on the informal freshness of such a thing. Perhaps even Felix Mendelssohn, who was noted as a super straight-laced kind of guy, would’ve relaxed. In any case, after returning to the stage, Huggett and her ensemble whipped up some froth in a program that featured Mendelssohn’s music, all from during his early years.

The orchestra started out with Mendelssohn’s String Symphony No. 6 in E major, which he wrote at the age of 12 as an exercise for his composition teacher Carl Friederich Zelter. The ensemble conveyed the cheerful nature of this work with incredible agility, crisp phrasing, and pinpoint stops. The instrumentalists also increased the tension in the final measures, which added a lot to the dynamic shape of the piece and made it satisfying to hear.

The orchestra played the concerto for violin, piano, and strings in D minor, which Mendelssohn created at the age of 14. Performing on a piano built in Vienna in 1841, guest artist Eric Zivian collaborated extremely well with Huggett, who played the solo violin parts. They got the utmost in color and expression from their instruments, especially in the slow second movement with its delicate and elegant sentiment. I also enjoyed the vigorous conducting by Huggett and the demonstrative sweep of the entire ensemble in the last movement.

After intermission came the Octet in E major (Op. 20), which Mendelssohn composed after he turned 20 years old. At the outset, the middle voices of the ensemble were not as strong as those on the edges, but the ensemble adjusted itself and played their hearts out. I wanted even more dynamic thrust from these players, but I have to admit that my ears have been tempered to performances by modern instruments. The Baroque sound was lighter and less accented. Plus, in the last movement, the ensemble increased the volume too quickly and didn’t have anywhere to go. Still, this was an exciting performance of a brilliant piece of music, and the audience rewarded it with thunderous applause.
Posted by James Bash at 3:26 PM