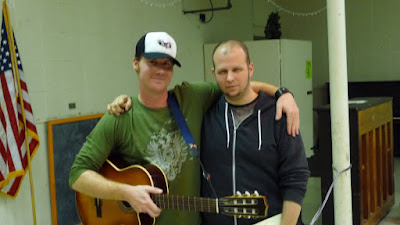 I recently had a chance to sit down and ask questions of Stephen Marc Beaudoin, librettist and director of the upcoming Oregon Opera Theater production of a re-telling of John Gay's The Beggar's Opera, and composer/arranger Michael Herrman, who is also the frontman for local indie rock group Buoy LaRue.
The Beggar's Opera was originally produced in London in 1728 by John Gay. Considered a ballad opera, it was part of a tradition that British theatergoers used to mock the pretension, and, it was felt, undue foreign influence of Italian (and Italian-syle) opera, which was then taking Europe by storm for the first time. Popular tunes of the day would be given new lyrics and set within the context of an opera, usually revolving around low-brow or criminal characters and situations.
The interview took the form of a lively, informal conversation, during which my questions were answered, not always after I had asked them (and sometimes without asking them at all.) With consent from the interviewees, the following represents a composite of the conversation in relation to my prepared questions; a full, unedited text of the conversation is posted at my blog, MusicalOozings. (See the SideNote entry at the end of the article for further information.)

LW: First things first: whose idea was this?
SMB: It was Katie [Taylor] at Opera Theater Oregon, who wrote me...because I had really been wanting to do this piece for a number of years. She had for some reason heard through the grapevine that I was talking about this and said to me ‘actually I’m thinking of doing that…do you want to write it and direct it?’ So she enticed me with it, and obviously she waved a big six-figure check in my face and that made all the difference.
LW: So you’re rich after this now? [laughter]
SMB: Yeah, I am, I am.
LW: Well that’s excellent, I’m glad to hear that.
MH: That’s funny…why was mine two figures? [more laughter]
LW: So what was the process like? How did it all come together?
SMB: Michael was one of the very first people I thought of to do the project. I had known his music from when I was writing for Willamette Week. Michael’s a strong songwriter, as you heard, [in reference to an earlier song MH played for us]. There’s something cinematic about the sweep of his music that I found very appealing and inherently theatrical and, I thought it was funny that after we started talking more he said ‘actually, I have a theater background.’
MH: My grandmother had a PhD in music, and my grandfather had a theater in New York City. My dad as a kid was always working the popcorn stand or taking tickets or whatever it was. It's in the blood.
LW: I’m curious about the overall collaborative process between the composer and librettist. That hasn’t always been the smoothest-working partnership in the history of music—how was it for you two?
MH: I thought it was incredibly smooth, and I think that Stephen and I work very well together. Having said that, this was also a brand new process for me. As a songwriter I'm usually the lyricist and the composer, so this was a different process. But I welcomed it; that’s part of what I want to do as a songwriter is to be stretched in these different ways, and try different avenues of writing songs, and Stephen and I just clicked. There isn’t an ego battle, or struggle between us at all…
SMB: Because he knows who’s in charge. [laughter]
MH: Yeah…the guy holding the guitar. [all laugh again.] But no, right off the bat…first of all, we established the working relationship: “This is what I’m going to do, this is what you’re going to do; we’re going to come together and see how it goes, iron out any problems."
L: So what was that [the nature of the relationship]? If you could boil it down.
MH: It was: Stephen was going to write the lyric and send it to me, and I would write around it. Basically.
SMB: And improve upon it sometimes. It's very hard for me to divorce myself from thinking about a tune while writing it. And very often, to be totally honest with you, I would sometimes write a lyric with a song in mind. Like the very first song! Which is the first song of the show.[he starts humming] I gave him this lyric, and [the result was] not what I thought it was going to be—it’s so much better.
MH: [laughter] Well, I didn’t know what he had in mind either. I didn’t know that…and I didn’t want to know either, because it probably would’ve…influenced me.
LW: Besides the thematic content, are there any homages to Gay’s 1728 original? For instance, are any of Stephen’s lyrics set to popular tunes of our day, or arrangements thereof by Michael?

SMB: It’s a great question. We did not [do that]. I thought about that…[to MH] I never actually approached you with that idea because my thought was, in a sense your music would be the contemporary pop…
MH: The link.
SMB: Yes, the link. So we chose not to go that route.
LW: Are there any quotations of tunes used by Gay?

SMB: The musical concept was interesting. What we did was we took about twenty tunes from the original and basically imported them wholesale into the show. And those tunes, and Michael’s arrangements, which are new, are the tunes from the original. Now sometimes we’ve changed some accidentals, or time signatures, that sort of thing. But those tunes from the original are the tunes that the characters sing in the context of the drama.
MH: My job was was to do eight full-on new, original songs, and then arrange for Buoy LaRue to play somewhere in the ballpark of 20 of the old airs. So what we had was what you just heard Stephen playing on the piano—that was the melody line that we had to work with, with some small alterations, and try to do it in the sensibility of what Buoy LaRue would bring to it.
SMB: And also in the sense of what was going on in the show.
LW: There have been a number of re-envisionings of the Beggar’s opera in the last couple of centuries. How does this version fit in with that tradition?
SMB: I think that anything that’s worth it’s weight, like Romeo and Juliet, is something that’s been kicked around a lot in terms of different interpretations and new film adaptations and all those sorts of things. So I think that if something is timely in its way, it’s going to want to be re-imagined again and again. I make some winking references to the Threepenny Opera [itself a nod to Gay's 1728 original] and I make plenty of references to Gay in this. I’m going to be very interested to know what the audiences pick up, because obviously audiences are going to come from people who have no idea, who have never heard this piece before and don’t know it from Adam…this is a whole new piece for them, which is great. And we’re going to have some people who will say ‘oh, I’ve studied this in college,’ and so it’s going to be interesting to see what they pick up. But it is important for this piece to be seen today because…nothing’s changed. Like in London of 1728 when political corruption was running rampant and people were dying...out on the streets, it was this filthy, festering, disgusting, wonderful place, and Portland is just like that. [laughter] Portland is just like that.

For a fuller understanding of the conversation, complete and unedited in all of its glorious, real-life, hiccupping conversational verismo including original lyrics (some very ribald and hilarious) and unedited rambling, see this SideNote at MusicalOozings. All original language is preserved and the flow of the conversation is presented as it actually happened, with many different topics and sub-topics are examined. See photos of the librettist being assaulted with a guitar--immerse yourself more fully in the seamy underworld of newly-created alternative Portland opera!
Posted by Lorin Wilkerson at 5:55 PM

thanks for the great interview and the coverage, lorin!