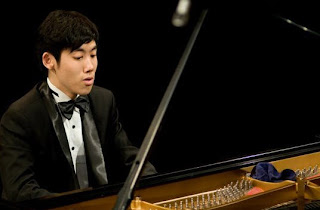 I had the fortunate of attending the Van Cliburn Piano Competition earlier this year, and was looking forward to hearing Zhang at this concert. My experience at the concert in Portland was marred by a member of the audience (a man in his 40s) who suffered from a repetitive sniffing syndrome. Initially I thought that he had a cold, but it was something that was wrapped into his psyche. So, I endured this disturbance during the first half and moved to the second balcony for the second half.

Zhang opened his recital with a probing performance of Beethoven’s Sonata in A-flat major (Opus 110). This was an arresting piece in which Zhang delved into the tender and careful nature of Beethoven’s music extremely well. Of course, the piece contains a demonstrative side that would flare up occasionally, but I came away from the piece with the feeling that Beethoven was exploring new horizons – even during the last years of his life – all of which were marked by his deafness.

Next on the program, Zhang served a change-up pitch with “White Lies for Lomax” by Mason Bates. Zhang was very expressive in his playing, and he got into the herky-jerky honky tonk style of the piece but could’ve been a little more bluesy and free with it.

The first half of the concert closed with “Gaspard de la Nuit,” by Ravel. Zhang used his impeccable technique to great effect, bringing out all sorts of moods and emotions. Zhang created suspenseful shimmers, dark valleys, and a sort of atmospheric madness. And he did it all with flair, and the audience responded enthusiastically.

After intermission, Zhang played Brahms’ Variations and Fugue on a Theme by Handel (Opus 24) and really wowed the listeners with his complete command of everything that Brahms dished out. Zhang also successfully built tension into his playing, which he released magnificently in the final variation.

Zhang unleashed even more technical fireworks with his performance of Liszt’s “Spanish Rhapsody” (S. 254). It was fun to hear Zhang dig into this piece with flawless technique and fingers flying so fast that they could put your mind into a time warp. He succeed again in building up tension and releasing it in a finale that brought down the house and got the audience to leap to its feet.

With the applause cascading around him, Zhang played an encore, which he simply said was a “Chinese folk piece.” Here Zhang seemed to get even more into his element with completely virtuosic playing and wonderful expressiveness. It was a terrific conclusion to a fine debut in Portland by a very promising, young pianist.

PS: In this concert, Portland Piano International used a large screen to display the movement of the pianist’s hands so that everyone in Newmark Theatre could see his playing. This was a wonderful addition to the recital experience, and I hope that it becomes a standard feature of every PPI concert.
Posted by James Bash at 9:22 PM