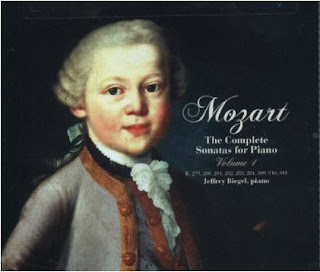 Earlier this year, Jeffrey Biegel released a marvelous recording of Mozart’s piano sonatas. Biegel combines impeccable technique with a fine sense for phrasing and a sense of where the music is going. I really enjoyed the balletic grace in Biegel’s playing, especially when he embellishes some passages in the Mozartian spirit of understatement.

The third disc has three sonatas that Mozart wrote when he traveled to Mannheim in 1777 and Paris in 1778. Sonata No. 7 (K. 309) was written for one of Mozart’s students and has some of the mannered elegance that was characteristic of the Mannheim style. Mozart wrote Sonata No. 8 (K. 310), which showed too much contrast and emotion for the Parisians. In Sonata No. 9 (K. 311), written in Mannheim, Mozart moved further towards his mature style, and Biegel plays all of this brilliantly.