Portland Youth Philharmonic fearless in ascent of Shostakovich and Bartók 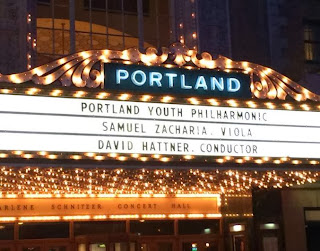 The Portland Youth Philharmonic added another notch in its collective belt, scaling the shifting terrain of Dmitri Shostakovich’s monumental Fourth Symphony on Saturday, March 1st at the Arlene Schnitzer Concert Hall. Led expertly by music director David Hattner, the young musicians gave a thrilling performance of the hour-long gem, which Shostakovich considered one of his finest works. Also at this concert, the orchestra teamed up with its Samuel Zacharia to deliver an evocative performance of Béla Bartók’s Viola Concerto, and the ensemble also played Kevin Walczyk’s “Celebration Fanfare.”

The Shostakovich Fourth hasn’t been heard in Oregon since 1985 mostly because it requires huge forces including 20 separate parts for woodwinds. That’s a headache in the pocketbook for professional orchestras, which would have to hire a lot of extra musicians. For this concert, the PYP was augmented by their younger colleagues in the Portland Youth Conservatory Orchestra. That translated, by my count, around 140 instrumentalists on the stage of the Schnitz. With many ensembles, the larger the forces, the weaker the cohesiveness of the performance, but that was not the case with at this concert. The high caliber of playing was evident from Hattner’s downbeat, which released an emphatic statement from the orchestra with barking French horns, a crashing gong, pulsating xylophone, and a massive wail from the entire ensemble. The orchestra created a vast array of intriguing textures and colors: at one moment a crisp brass section marched crisply onward, at another moment the strings would surge ahead, then the ensemble would fashion a diminuendo so well that the gentle sounds of two harps rang true and would clear out a space for a soulful passage from the principal bassoonists, Nicholas Clark and Debra Loh. The piece ebbed and flowed with terrific dynamics, including the beehive of sound when the strings whirled through a scintillating fugato section. Concertmaster Rachel Graves and principal trombonist Peter Judge played evocative solos, and the piece wound up in a mesmerizing way with rising notes from the celesta over a thick sonic mist from the strings.

Even without the Shostakovich, this program featured another exceptional piece, Bartók’s Viola Concerto, which the composer left in sketches at the time of his death and was completed by his pupil, Tibor Serly. The concerto received a brilliant performance – entirely from memory – by Zacharia, the PYP’s co-principal violist who won the orchestra’s annual concerto competition. Zacharia played the fast movements with impeccable technique and was equally skilled with the slow, plaintive sections as well. His cadenzas were superb and his playing delved into the serious nature of the piece with grace. The orchestra supported Zacharia with a transparent sound that made it very easy to hear him at all times. It was an amazing solo debut for Zacharia, who turned 15 on the same day (and he was treated to the "Happy Birthday" song by this orchestral colleagues).

The concert began with “Celebration Fanfare,” which Walzcyk wrote to mark the passage of the baton from the Oregon Symphony music director James DePreist to Carlos Kalmar in 2003. Aside from some slippage in the first couple of measures, the PYP delivered a robust performance, capturing the spirit of the piece handsomely.
Posted by James Bash at 10:50 AM