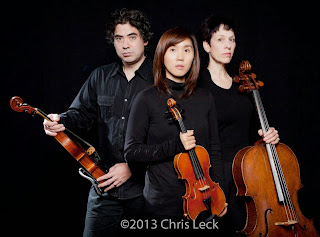 The culminating concert of this year’s edition of March Music Moderne featured an eclectic program of works that spanned from the very tonal and counterpoint-driven (Bach in an arrangement by Dmitri Sitkovetsky) to the distortion-heavy (Iannis Xenakis). Like previous incarnations of programs curated by MMM founder and artistic director Bob Priest, the music veered from one end to the other with generous helpings in between. All of the pieces were played with the utmost commitment by the Free Marz String Trio, which sported an all-new look with violinist Hae-jin Kim, violist Kenji Bunch, and cellist Diane Chaplin. They gave top-notch performances to a full house at the Community Music Center on the evening of March 16th.

Using the whimsical theme of “The Marzian Chronicles,” most of the musical selections were preceded by texts that were evocatively read by actor David Loftus. His reading from Ray Bradbury’s “The Martian Chronicles” nicely dovetailed into the first musical entrée, Ennio Morricone’s “Vivo.” The Free Marz String Trio delved into the nimble and dance-like mood of this piece. Deftly transitioning from a quick, stuttering section to a buzzy one, the ensemble shifted the mood of the piece. It seemed to become busier and almost anxious as it sped to the finale.

Another reading from “The Martian Chronicles” served to introduce James Harley’s “Trio Arachne,” which received its world premiere at this performance. Perhaps the music was inspired by the legend of Arachne, who lost to the goddess Athena after challenging her to a weaving contest. The piece created the sound of low-pitched sirens that gradually moved higher. After a period of agitation, the pace slowed down but the tone went higher, and then the sound became sort of like a glass harmonica being played underwater. That sound was beguiling.

Right afterwards, the ensemble played Iannis Xenakis “Ikhoor,” a sonically harsh piece that shredded sounds in a big way with strong chords that splintered all over the place. At one point, the atmosphere of the piece grew violent and off-center, with the instrumentalists creating a variety of wailing sirens. That segued into a thick hurdy-gurdy passage that was followed by a variety of crazy music with wild, shredding glissandos on all of the instruments. The sound verged on taking the chrome off the grill of a ’55 Chevy. The very extroverted turmoil of the piece seemed to suggest a composer who is going mad or the world going crazy or both.

Loftus read from Elias Canetti’s playful “Earwitness” as a preface to Dobrinka Tabakova’s “Insight.” The trio got the audience to exhale and relax with the close harmonics and blended sonorities of this piece, which included a sweet melodic line from violinist Kim. The piece had a Dvorak-like gravitas that seamlessly changed into a fugue-like section. Towards the end of the piece, the music grew serious and violinist Kim played a strong melodic theme, supported by the viola and cello, as the piece drew to a close.

After intermission, Loftus delivered “An Experiment with the Void” form Jasmina Reza’s “Hammerklavier.” This was followed by nine canons from Bach’s “The Goldberg Variations” in an arrangement by Dmitri Sitkovetsky. The performance by the Free Marz String Trio was wonderfully balanced and had the feeling of esprit de corps.

To prepare the audience for the last piece, Loftus read from Italo Calvino’s “Invisible Cities” and Ronni Lacroute read a brief passage from Satie (in French) as a preface to the “Erik Satie Tango Project.” The “Project” is one of Priest’s signature ideas. He commissioned nine composers to take the basic outline of Satie’s “Tango Perpetuel,” with an emphasis on using the first and last measures of Satie’s original in order to connect and fashion a new perpetual piece of music. Seven of the nine composers hail from the Portland metro area and the two others come from Victoria, British Columbia and Seattle. So, the “Erik Satie Tango Project” is most likely, the one commission that used the most composers from Pacific Northwest in 2014.

As an introductory note, Jennifer Wright played Satie’s score on a toy piano. This was followed by Heather Derome’s “Apeshit,” which, despite its name, was elegantly similar to the original in temperament, and it contrasted well with Linda Woody’s “Menage á Trois,” which had a spunkier and more animated character. As suggested by its title, “Tango Glaciel,” John Berendzen’s take was a down-tempo affair – heaped with slow-motion glissandos – and it faded (or slid) away in the last few measures. Denis Floyd’s “The Devil’s Dance” had a slightly strident style, but it didn’t whirl about in a devilish way. Robert McBride’s “It Takes Three” had thematic lines that went off in different directions in a tongue-and-cheek way that was accented by Chaplin’s humorous pose at the very end. Byron Au Young’s “Tangosa” featured tapping bows, glissandos, and strong lines for the viola, which was expertly played by Bunch. More rapping and glissandi followed in Jennifer Wright’s “Le Tango Ineffectuel,” which sported a deceptive ending that was punctuated, again, by the superior acting skills of Chaplin. Rhythmic foot stomping and hand clapping complimented Beth Karp’s “Judgment Day Tango.” The final number provided something altogether unique, because Kenji Bunch brought out a white sheet-cake that had the score printed on it (you can laser anything onto the top of a cake these days). He put a candle in it and lit it. Then the trio bent over the score and played Bunch’s “Sandcastle #4,” a bouncy, folksy, and slightly motoric piece that put a smile on everyone’s face. After the piece ended, Chaplin stood up and cut a piece of the cake and ate it, saying, “I think that was bar 9.”

During the reception that followed, Chaplin put the cake on a table near the front door of the Community Music Center. She wanted everyone to partake in a piece of the cake, but she wouldn’t allow photos. On the one hand, this prohibition reminded all of us of how unique and ephemeral music-making is, and on the other hand it left us with the impression that musicians can have their cake and eat it too.
Posted by James Bash at 11:36 PM