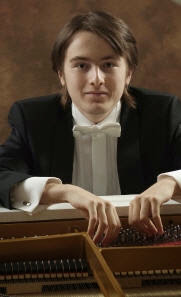 If a pianist can be as one with the keyboard, then that’s what seemed to have happened between Danill Trifonov and the Steinway he played on Sunday afternoon (March 9th) at Lincoln Concert Hall. Displaying a heightened sense of artistry in every sense of the word, Trifonov’s recital, presented by the Portland Piano International, was awe-inspiring. He used his virtuosic talents to delve into the music rather just exploit it in a way that could have merely been showy or flashy and attention-getting. In his playing of works by Chopin, Tchaikovsky, and Schumann, Trifonov mined into the heart of each piece and made each moment of sound a life-enhancing experience for those of us in the audience.

Chopin’s “24 Preludes” received a tour-de-force performance from Trifonov. He brilliantly exposed the full dynamic range of each piece, infusing some of the slower ones with a tinge of melancholy and infusing several of the fast ones with wild, tempestuous abandon. But his playing was much more than just alternating between the extremes of slow and fast or soft and loud. It was all that and everything in between that he used to create moods that ranged from dreamy to stormy. The interesting thing about his playing of the “24 Preludes” was that his interpretation got stronger and stronger. It drew you into his vision, and the music seemed to acquire a life of its own. Audience members didn’t cough or make any extraneous noise, because they were so absorbed in Trifonov’s artistry.

After intermission, Trifonov brought Tchaikovsky’s Theme and Variations from “Six morceaux” to life, again using his incredible technical skills and artistic talent. From a little unassuming theme, he created an entire landscape of heights and depths that took listeners on a fantastic journey that had a faux-climax with a rollicking section that blistered with agitated chords before quickening the pace into a whirling finale. His performance left people in awe and gasping for breath.

With Schumann’s “Symphonic Etudes” Trifonov provided another exemplary excursion into the Romantic repertory, playing with fierce intensity and an emotional exuberance that made the audience listen in rapt attention. Soft crystalline passages could suddenly change into thundering ones at the drop of a sixteenth note. Equally adept at bringing the melodic line out just a tad in either the right or the left hand, the music, at times, had an iridescent quality. He was so into the piece that drops of sweat periodically dripped from his forehead to the keyboard. But just as with the other works on the program, Trifonov’s artistry made people care about the music as if it were a life or death matter, and the explosion of applause and cheering at the end of the piece was unstinting.

Trifonov responded with two encores: I didn’t catch the title of the first one, but the second was Rachmaninoff’s arrangement of the "Gavotte" from a Bach Violin Partita. Both were outstandingly played and elicited an enthusiastic response from the audience. At age 23 and with three recordings and an busy schedule with major orchestras everywhere, Trifonov will be a pianist to reckon with on the world stages. Hopefully, we will hear him again in Portland.
Posted by James Bash at 10:54 PM