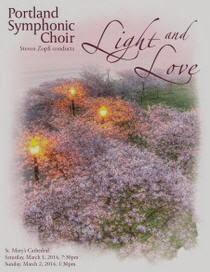 It is a pleasure beyond measure to enjoy a concert by Portland's premier large chorus that is dedicated to masterworks of the choral repertoire. Sunday (March 2nd) afternoon's late winter concert, themed "Light and Love," took place in the sacred and acoustically live space of our local Catholic Cathedral. Warm and dry inside, it was a refuge from the constant rain, the "permamist," of Portland; more than simple enhancement, the gorgeous choral music offered was, as always, a joy.

"Light and Love" brought to mind recent celebrations and observances of both the Presentation of Christ in the Temple, Candlemas, a month ago, with its blessing and procession with candles, reminiscent of the aged Simeon's canticle Nunc Dimittis: "… to be a light to enlighten the Nations …" and St. Valentine's Day with its love, arrows and affection.

As conductor Steven Zopfi mentioned in his introductory comments, Josef Rheinberger, a lover of nature, in his work Drei geistliche Gesänge sets first a text about morning (translated: "The darkness [God] has banished, / you, children, take no fright; / he comes to those who love him, / the Father of all light"). Another love of the composer was religion and the second part is from the Offertory proper for Christmas Day, based on Psalm 89:12,15 (translated: "Thine are the heavens, thine the earth …"). The little trilogy ends with Abendlied, contrasted with the opening morning song, with the text from the Gospel According to Luke, "Abide with us … the day is far spent."

Next was "Village Wedding," by the late John Tavener, that reflects his Orthodox conversion by depicting, through a series of musical and verbal images, a village wedding ceremony in Greece. Zopfi mentioned that this could be considered a homage to Igor Stravinsky, and it was easy to hear that in this work. A simple, four-note theme is developed throughout. The composer's notes at its premier performance by the Hilliard Ensemble at the Vale of Glamorgan Festival in 1992 set the scene: "My insertion of Isaiah's Dance (the moment in the Orthodox marriage ceremony when the couple is solemnly led three times around the Holy Table by the Celebrant), and the whole tone of (Angelos) Sikelianos' poetry … show that everything in the natural and visible world, when rightly perceived, is an expression of a supernatural and invisible order of reality." The American premiere took place in 1995 with Chanticleer. I'm wondering if this weekend's fine performance was a Portland premiere?

The "Isaiah's Dance" is the most engaging section of this piece, lively and jaunty, then peaceful and tranquil. One could reflect on Tavener's life in that same vein, a life that sadly ended last year. His spare, austere music is a terrific basis for meditation and contemplation. Imagining a painting or icon of the Wedding in Cana of Galilee, up behind the altar of the cathedral, is easy!

Part of the text follows here:


To my beloved, who breaks my heart
O Isaiah, dance for joy, for the Virgin is with child. [interspersed between the following lines]
Do you listen within your veil, silent, God-quickened heart?
O depth and stillness of virginity! Follow your man.
Let them throw white rice like a spring shower.
Like a spring cloud, let her now tenderly spread her bridal veil.
O the peace of the bridal dawn.
And he listens, and he listens.
And, as in front of a fount of crystal water,
Let the girls pass in front of the bride,
Observing her look from the corner of their eyes,
As though balancing pitchers on their heads.
…
Held by your husband's strong heart,
And he listens.
Bring into the world with a single cry your child,
As the poet brings forth his creation.

Unfortunately, the text was omitted in the attractively printed program provided for the audience. Perhaps this can be rectified for future concerts of this kind, in which seeing the texts is integral to the total listening experience. Otherwise, PSC's printed program was the most attractively produced I've seen in a long while, and considerable care was given to it. The written and spoken notes and commentary by Steven Zopfi were most welcome and helpful.

Eric Whitacre's unique setting of the poems of his then-girl friend (and now his wife), Hila Plitmann, called "Five Hebrew Love Songs," concluded the first part of the concert. Each of the poems is artfully set by one who, when he began his studies, could not read music! That has certainly changed, and in a big way. Anyone who has sung Whitacre's works, or listened closely to them, is immediately struck with tenderness, boisterousness, contrasts (e.g., between male and female voices) and sheer joy. Eric and Hila were obviously madly in love with each other and his music reveals that. While a mostly wordless, delicate sound was heard in Éyze shéleg! ("What snow!"), baritone Ariel Rogson's expert Hebrew was spoken. The listener had to be attentive to all five poems to enjoy the effect. The lovely and integral violin part was well-played by Janet George and percussion was executed by Gordon Rencher. Signe Lusk competently played the piano accompaniment. After the cycle, I found myself turning to my spouse and saying "Wow!" as we smiled at each other and realized that Whitacre is our younger son's age!

After intermission, there were three more works, each sung with accuracy and skill by this wonderful choir who produce "walls of sound" that emphasize the joy of making music like this in a choir and presenting it to an audience who, it is hoped, share that joy. René Clausen's Magnificat was first, utilizing both the Latin text,(Magnificat, anima mea…), intoned by Emily Kalteich, and an English text. As far as I could tell, this is the English Language Liturgical Consultation (formerly known as the International Consultation on English Texts) translation. It provides a more modern version of the traditional English text from the Book of Common Prayer, 1662 (or American 1928). I suppose this is due to Clausen being the Director of Choral Music at Concordia College, Moorhead, Minnesota, which is under the auspices of the Evangelical Lutheran Church in America (ELCA), and its liturgical life makes a large impact on the institution's esthetic and musical life. It was refreshing to hear, and I was reminded of the splendid choral tradition at that college, the present-day artists there being descendants of F. Melius Christiansen and his followers. This piece was commissioned in 1988 and, as Zopfi's notes mention, "… is a wonderful example of Clausen's love of thick textures, interesting solo lines, angular soprano parts [not unlike Morten Lauridsen's, ed.], and Clausen's ability to dramatize the text." This setting of the Canticle of Mary would be most suitable for Choral Evensong from some English Cathedral or Collegiate Chapel on BBC Radio Three, sung in the context of the liturgy. Perhaps we'll hear it on their streaming audio one day!

Morten Lauridsen, the noted composer who hails from Beaverton, has written a body of choral works that have become increasingly popular through the years. The choral textures and shapes, the angularity of sound, especially in the soprano parts, the selection of engaging texts, are all hallmarks of this man's lovely and accessible music. Nearly two years ago, some of us were present at First Unitarian Church to see a film about Lauridsen, the PSU Chamber Choir performed a few works, and the composer himself was present to talk with the audience. It was an unforgettable evening.

In this cycle, entitled "Nocturnes," there are four choral songs, two in French with texts by Rilke, another in Spanish with text by Neruda, and another in English, text by James Agee. The delicate accompaniment is with piano, deftly handled by Signe Lusk. "Nocturnes" was commissioned by the American Choral Directors Association in 2005 and was premiered at their national conference that year by the Donald Brinegar Singers with the composer at the piano. "The poetry of the first two songs and the last of the cycle use the imagery of night to represent death, and they serve as songs about light as well as love. The third, "Sure on this Shining Night," sets Agee's poem of the same name, which is most famously set by Samuel Barber, first as a solo song and then later as a choral work." (Steven Zopfi) Having sung Barber's song and heard the choral version, it would be a hard choice to choose one over the other version. Lauridsen's setting was more fitting, I feel, for the context and theme of this concert. The whole cycle was performed without breaks, giving a seamless impression of "whole cloth." Lauridsen never gets stale!

The excellent performance of "Hymn to the Creator of Light" by John Rutter would have been enhanced by providing the text, written by the Anglican divine, Lancelot Andrewes, probably in Latin, and translated into English by Alexander Whyte.

This was juxtaposed with the text by Johannes Franck, translated by Catherine Winkworth, and sung to Schmücke Dich, which is used at the conclusion of the piece.


Light, who dost my soul enlighten;
Sun, who all my life dost brighten;
Joy, the sweetest man e'er knoweth;
Fount, whence all my being floweth.
From thy banquet let me measure,
Lord, how vast and deep its treasure;
Through the gifts thou here dost give us,
As thy guest in heav'n receive us.

Again, the "wall of sound" came into play, and the listener could readily catch what Zopfi remarked, that he got the idea for this concert from this piece. The work is for double a capella choir and is an homage to Herbert Howells, whose Church music is especially keen and sung over and over in both England and America. Zopfi "warned" Sunday's audience that this is not like other work by Rutter. "Hymn" is not a brash, in-your-face sort of piece, with brasses blaring triumphantly and with many syncopated rhythms. Rather, it was more introspective and meditative, thus fitting in with the theme of light and love. In the chorale is the line, "Oh, how vast and deep its treasure …"; the vast, deep treasure was right there in the midst of all of us present Sunday at St. Mary's Cathedral. Thank you, Portland Symphonic Choir and Steven Zopfi, you are a treasure and a gift to all of us!
---
Phillip Ayers sings with the Portland Bach Cantata Choir and for ten years sang with the PortlandSymphonic Choir. From 2001-2007 he produced and hosted "Choral Classics" on All Classical radio. A retired Episcopal priest, he and his spouse are former church organists and choir directors and now enjoys "sitting in the pew" at church and concerts.
Posted by James Bash at 3:58 PM

Thanks, friend Philip! This is a keeper, especially for a PSC member. A lot of valuable information about the pieces and their composers, although not much about the singing. One typo: in the Tavener, it's "balancing pitchers on their heads", not "on their hearts", although the latter is a very suggesting and appropriate symbolic image.

how I wish I could have been there!