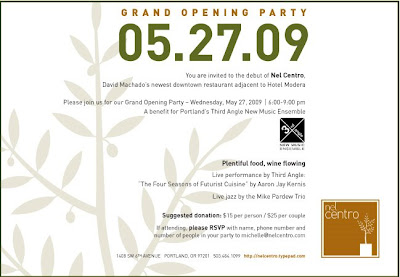 Nel Centro, a new restaurant, is holding its grand opening as a benefit for the Third Angle New Music Ensemble. The wingding takes place on Wednesday, May 27 and includes a performance by Third Angle of Aaron Jay Kernis "The Four Seasons of Futuristic Cusine" with local actress Michele Mariana as the narrator.

Tickets are very reasonably priced at $15/person or $25/couple. RSVP to michelle@nelcentro.com.