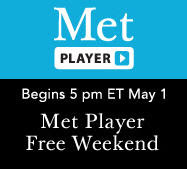 You can bring the Metropolitan Opera to your computer screen for free this weekend by trying out its Met Player. This offer extends from today until Sunday. Met Player will stream the operas that you select, and there are 200 to chose from, including a number in High Definition format.

he Metropolitan Opera will offer a free weekend of unlimited access to Met Player, the subscription service that makes much of the company’s extensive video and audio catalog of full-length performances available to the public online, in exceptional, state-of-the-art quality. The free preview begins at 5pm ET on Friday, May 1, and runs through midnight on Sunday, May 3. During this time, users logging into Met Player will have access to the entire collection of more than 200 audio and video performances, including 20 of the company’s acclaimed HD productions from the first three seasons of The Met: Live in HD series. HD titles recently added to the Met Player catalog include this season’s transmissions of Massenet’s Thaïs starring Renée Fleming and Thomas Hampson, Puccini’s La Rondine featuring Angela Gheorghiu and Roberto Alagna, and Donizetti’s Lucia di Lammermoor with Anna Netrebko and Piotr Beczala. Met Player also features the wide range of Music Director James Levine’s work, from Mozart’s comic masterpiece Cosi fan Tutte to Wagner’s epic Ring cycle.

Recent upgrades to Met Player include the addition of multi-language subtitles (French, German, and Spanish) to the current season’s HD titles; English subtitles are available for all videos (but can be turned off if preferred).

Met Player offers a wealth of video performances to choose from, including Puccini’s La Bohème with Renata Scotto and Luciano Pavarotti (1977), Plácido Domingo in Verdi’s Otello (1995), and Verdi’s La Forza del Destino with Leontyne Price (1984), as well as the recent HD live shows from the 2006-07 and 2007-08 seasons, including Natalie Dessay and Juan Diego Flórez in Donizetti’s La Fille du Regiment. Some of the initial offerings have never been seen since their original television broadcasts: Mascagni’s Cavalleria Rusticana and Leoncavallo’s Pagliacci with Tatiana Troyanos, Teresa Stratas, and Domingo (1978); Price’s legendary farewell performance in Verdi’s Aida (1985); and Tschaikovsky’s The Queen of Spades with Galina Gorchakova and Domingo (1999).

In order to register for the free weekend of Met Player, users must have an active username and password for the Met website. New users can set this up by visiting the “Register” page at metopera.org and providing basic contact information. No credit card will be required. Additional information will be available on the Met website during this free period to assist customers.

Subscription fees are priced at $14.99 per month or $149.99 for a yearly plan. As a special benefit for Met members who contribute at the $125 level or above, a six-month introductory package is available for $49.99. Individual purchases will cost $4.99 for HD videos and $3.99 for an audio performance or non-HD video; these individual purchases may be played in a six-hour period within 30 days. Met Player will provide a free downloadable audio and video website player with any rental or subscription order. A one week free trial subscription will be available to anyone after registration.

The Met's Opera broadcast on an HD radio station with crystal-clear sound quality is unbelievable! To find the HD Radio stations in your area that carry the Met's broadcast and for a lot more info on HD radio and a great selection of HD radio receivers, HD radio tuners, and home audio go to www.hdradiotuner.org