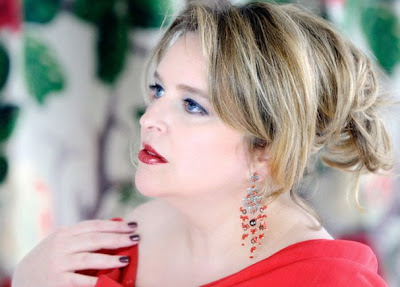 The Oregon Symphony under the direction of Carlos Kalmar continues to make some amazing music. On Saturday evening (May 9) the ensemble created a seamless transition from the placid atmosphere of Eric Satie’s “Gymnopédies” through the idyllic soundscape of Samuel Barber’s “Knoxville: Summer of 1915,” and ending in the jumbletron of Mahler’s Symphony No. 4. The Barber and Mahler piece also featured Canadian soprano Karina Gauvin, who last sang with the orchestra in 2006 in Mozart’s Requiem.

Gauvin possesses a soprano voice that is absolutely golden, but in a venue like the Schnitz, she needed to project with a bit more volume for Barber’s “Knoxville: Summer of 1915.” I know that the mood of this piece speaks to lazy days with family and friends in a comfy neighborhood, and I loved how Gauvin’s silky smooth voice matched the tone of the orchestra, but it needed to be a tad louder. Without supertitles, I had to resort to reading the text (a poem by James Agee) in my program. Yet the text is in pretty small print and the house lights were down. I still managed to read the text and follow along, but it wasn’t fun. Either the text should be larger or the house lights should be left up. Or Gauvin should sing a little louder. Then we could all relax into the Barber’s Knoxville.

The combination of Gauvin and the orchestra went a lot better in Mahler’s 4th Symphony, and that might be due to the fact that Mahler can be loud and Gauvin upped her volume accordingly. She only had to sing the fourth movement in which Mahler’s music describes a child’s view of heaven. But amidst the feathery music, there’s plenty of wild stuff that erupts periodically because the angels are cooking, feasting, and having a great party.

The orchestra glowed throughout the Mahler. During the first movement I had a feeling that Mahler was walking down a side street or an alley in Vienna and observing how other people lived. Over the next two movements the music moves to an interior dialogue and in the fourth, Mahler muses about the afterlife. Well, all of this speculation may be wrongheaded, but it shows how stimulating Mahler’s music is. Kalmar led the orchestra through a dizzying amount of changes in tempo and volume. It seemed that the orchestra watched him like a hawk, and I even noticed that some orchestra members were enjoying their musical trip immensely.

Principal trumpeter Jeffrey Work, principal oboist Martin Hebert, concertmaster Jun Iwasaki (on two violins tune differently), the bassoons and the clarinet section deserve kudos for outstanding contributions. I also loved the horn, oboe, and English horn trio in the third movement as well as the pillowy pizzicato passages from the cellos and basses and the rumble from the contrabassoon whenever it was called into action.

The concert ended on a restful, sublime note, which linked nicely back to the Satie piece at the very beginning. The orchestra played “Gymnopédies” with absolute clarity and no vibrato, evoking the balletic movement of athletes at a festival in ancient Sparta, which was the image that inspired Satie.

All is well, in ancient Greece, Knoxville, and in heaven.
Posted by James Bash at 10:32 AM

Yep. That pretty much reflects my own view of this concert which I thought was good but far from outstanding. Indeed I thought some of the orchestral playing in the Mahler was a tad ragged. But it did feel right.