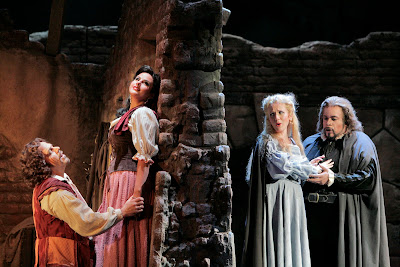 The combo of Mark Rucker and Sarah Coburn added an extra layer of emotion that made the Portland Opera production of Verdi’s “Rigoletto” a dynamic and satisfying experience on opening night (Friday, May 8). Rucker, in the title role as the hunch-backed jester, blustered, cried, and raged magnificently, and Colburn completely embodied his love-smitten, totally sincere daughter, Gilda.

Coburn’s beautiful soprano tone blended purity, conviction, vulnerability, and energy in intoxicating amounts. Her “Caro nome” (“Sweet name”) aria at the end of the first act was riveting. Another highlight came at the very end of the opera when the ethereal father/daughter duet “Ah, ch’io taccia! (“Let me be silent!”) took the audience to new heights before plunging it into darkness with the death of Gilda in the arms of a utterly devastated Rigoletto.

In complete contrast, the opening Ducal-court-gone-wild scene was replete with courtiers worthy of a frat house. Encouraging the drinking, laughter, and lascivious behavior, Richard Troxell displayed gestures and bearing that easily captured the hedonistic arrogance of the Duke of Mantua. Yet his voice sounded a little tight and needed more expansiveness in order to give his character more of a thrill factor.

Peter Volpe created a striking Sparafucile, the hit man who offered to fulfill Rigoletto’s desire for vengeance on the Duke but ended up murdering Gilda instead. Vople has a resonant bass and after describing his services hit a low F that lingered well after he exited the stage. Jossie Pérez made an alluring Maddalena, Sparafucile’s sister and his accomplice. Of particular note was the way that Pérez convincingly changed from initial defiance to completely caving in to the Duke’s good looks.

Keith Miller, as the wrongly condemned Count Monterone, leveled a curse on Rigoletto with such force that it would’ve stripped the chrome off of a ’57 Chevy. Speaking of curses, in ancient times it was believed that a curse carried the spirit of a human being. Therefore, if the curse was directed at you then it was best if you could avoid it by falling to the ground or dodging it somehow. Even today, though we, at least from an objective, scientific perspective, think that a curse has no real bearing whatsoever, in our guts, we feel that strong words hit hard. If you have ever had anyone direct something like the words “you will amount to nothing” at you, then you know of the staying power of that language. And, so in this opera, the character of Rigoletto reminds us more than once that he has been stained.

Others in the cast who distinguished themselves in minor roles were Brendan Tuohy as Matteo Borsa, Sharin Apostolou as the Countess Ceprano, Jonathan Kimple as Count Ceprano, and Hannah S. Penna Giovanna.

Conductor George Manahan led the orchestral forces superbly. Flutists GeorgeAnne Ries and Rachel Anderson deserve high praise for their evocative playing. Another terrific point in the opera came when the orchestra and the singers (Troxell, Pérez, Rucker, and Colburn) delivered “Bella figlia dell’amore” (“Fairest daughter of love”) at full-throttle with urgency and passion.

Stage direction by Christopher Mattaliano gave the story focus and momentum. The costumes by Susan Memmott-Allred for Utah Symphony and opera were traditional.

The scenery, designed by Sarah J. Conly and J. Michael Deegan for The Atlanta Opera, set the action squarely in a stone-secure palace of the 1500s. With some adjustments the palace became the part of town where Rigoletto lived. Yet the final scene, which takes place at a rundown inn, has a wall that seemed to obstruct the view of audience members who were seated near the front and to the extreme left side. 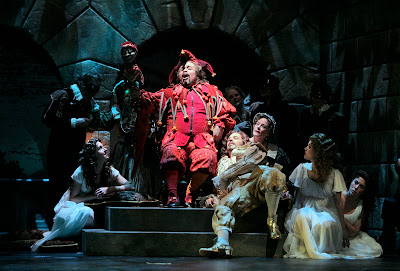