A fine sense of teamwork helped to create a funny and rewarding performance of Mozart's “The Marriage of Figaro” at Seattle Opera on opening night (Saturday, May 2) at McCaw Hall. The high-spirited and complex plot of this comedy creates many opportunities for something to go awry, yet the principals collaborated with expert timing to make all of the shenanigans work without a hitch and the audience loved every minute of it.

In the role of Figaro, Oren Gradus combined a supple and resonant baritone with outstanding acting to enhance the story with warmth, good humor, and occasional furry (like when he suspects his fiancé of a dalliance with the Count). Christine Brandes created a sensational Susanna, displaying a beautiful soprano tone and having fun throughout the entire opera. The scene in which she uses her feminine wiles to arouse the Count was just one of many that captured the attention of the audience as well.

As Count Almaviva, Mariusz Kwiecien swaggered with virility. And with the penitent plea at the end of the story, when he asks for forgiveness from his wife, Kwiecien gave the Count some genuineness that effectively countered the impression that he made as sensuous, worldly, and utterly vain nobleman. Twyla Robinson’s Countess Almaviva was dignified and aptly conveyed the suffering of a wife who wanted the affections of her husband.

Daniela Sindram embodied the fidgety and amorous Cherubino with aplomb. She conveyed love-struck teenager to such a degree that she could, while seated, make her knee nervously bob up and down and sing at the same time. Sindram’s “Voi che sapete che cosa è amor” (“You who know what love is”) was one of the many highlights of the evening.

Conductor Dean Williamson and orchestra had many fine moments, starting with the overture which chirped happily. Williamson also played the harpsichord with a flourish that added sparkle to this production. Yet all was not completely flawless. A few notes were missed, and the singers got out of sync with the conductor, albeit briefly.

Clear stage directions by Peter Kazaras kept the plot from becoming confusing. The audience always knew which letter was being discussed, who was serenading whom, and who could hear but could not see what was happening.

Jonathan Dean deserves praise for his succinct English supertitles, but sometimes they seemed too minimalist. There was a sense that too much text was flying without translation. Even a couple of “Oh Heavens” for “O cielo” would’ve been nice.

The scenery, constructed by the Banff Centre, evoked the interior of a mansion in the French style of the late 18th century. The pastel greens and nudes on the interior walls suggested nature and aptly pointed toward the final scene in the garden where all of the humorous assignations took place. Deborah Trout’s costumes, executed by Seattle Opera, were traditional yet colorful. Lighting designer Connie Yun accented the production superbly. 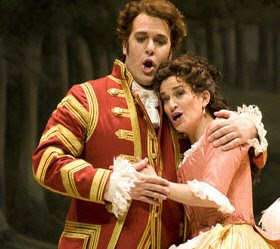 Rozarii Lynch photo
Posted by James Bash at 9:06 AM