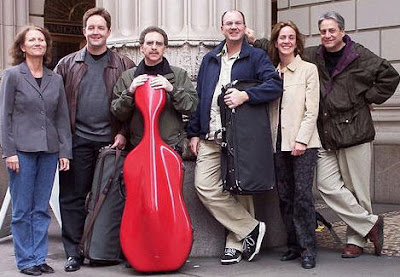 It has got to be a little nerve-wracking to play the music of living composers when they are in the audience, but the stakes are even higher when a two-time Grammy winning composer is sitting in the front row, alert as a robin in spring time. Yet members of the Third Angle New Music Ensemble stepped up and played their hearts out last night (May 15) at the Old Church in a concert that primarily featured the music of Jennifer Higdon.

Things started off sort of like a rock concert when the audience (which almost filled the hall to capacity) enthusiastically greeted the performers as they walked onto the stage even though their appearance was somewhat tardy. In a short preparatory remark, Higdon told how the first number on the program, “Celestial Hymns” had been played at the Angel Fire, New Mexico, which is at a very high elevation, and that she had worried that the ensemble there might pass out because of the demands of the music. I got a sense of what she was referring to because clarinetist Todd Kuhns had to breathe life into a note that he sustained for a very long time right at the beginning of the piece. Supported by crisp playing from his comrades, violinist Ron Blessinger, violist Brian Quincey, cellist Hamilton Cheifetz, and pianist Susan Smith, Kuhns used superior breath control to get the most out of this evocative work, and together the ensemble took us to a higher plain that was soothing and satisfying.

The second piece, “Rhyme,” was written by one of Higdon’s students, Zhou Tian, for solo cello. The music sounded and looked extremely challenging, but, fortunately, Cheifetz conquered its virtuosic demands with élan. Cheifetz’s ability to play two notes at and pluck another at the same time was a delight to the ears and eyes. And in the third movement, he had to pizzicato like a madman running down the street blindfolded. The wild glissando that ended the piece wrapped it all up with a stunning statement. Still, I wonder what kind of rhyme the composer was thinking of… maybe one that got away.

The first half of the program closed with Blessinger and Smith performing Higdon’s “String Poetic.” This five moment work took us through five arresting moods. I liked the “Jagged Climb” and the “Climb Jagged” the most. Blessinger and Smith performed these them with a rhythmic intensity that electrified the atmosphere and left the audience in a buzz.

After intermission, Kuhns and Smith played “Four Autumn Landscapes” by Chirs Rogerson, who is one of Higdon’s students and was in attendance. Rogerson’s piece depicted stunningly clear pictures of “A Cold Clear Dawn,” “Maple Creek,” “Scattered Leaves,” and “December Woods.” The music sounded neo-romantic and wistful at times, and Kuhns and Smith performed it all exquisitely.

The next work on the program was Daniel Kellogg’s “Momentum,” for solo piano. Smith tackled the virtosic rigor of this piece with vigor. Yet its music is very complex and left me wanting to hear it again so that I can get a better grasp of it.

As a grand finale, fluist GeorgeAnne Ries and percussionist Gordon Rencher joined Kuhns, Blessinger, Cheifetz and Smith to deliver a rousing performance of Higdon’s “Zaka.” I loved the joy of this music and the energy that the ensemble gave it. Its pulsating rhythms, wild sounds, and feistiness gave it a fun factor that put smiles on everyone’s faces. It was great to watch Blessinger and Cheifetz tap their instruments with crochet hooks, Smith reach inside the piano to strum it with a guitar pick, Kuhns remove the mouthpiece of his clarinet and thump his hand on barrel end, Ries overblow her flute, and Rencher dance back and forth between various percussion instruments. The rambunctious sounds of this piece caused listeners to respond with resounding applause and a standing ovation.

For photos of the concert, check out paparazzo Charles Noble’s blog here.
Posted by James Bash at 3:47 PM