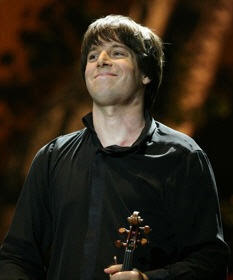 Joshua Bell, one of the hottest names in classical music, maxed out the Arlene Schnitzer Concert Hall and garnered a standing room only crowd at the Oregon Symphony’s concert on Saturday evening (May 16), but it was the orchestra’s playing of Anton Bruckner’s Symphony No. 7 that soared and brought listeners to something in the neighborhood of heaven.

Bell, one of the few classical superstars in the US, opened the concert with an impeccable and seamless performance of Mendelssohn’s Violin Concerto. Strangely enough, though, Bell’s playing came across as gloss and polish but lacked depth and soul. He hit all the right notes with impeccable virtuosity, but it was flash and dash. The stunning effect didn’t’ deter the audience, which rewarded him with thunderous applause, which brought him back to the stage four times after which he played a real show stopper, a solo arrangement of an 1844 Henri Vieuxtemps’ novelty, “Souvenir d'Amérique," a series of "burlesque" variations “Yankee Doodle.” At the end of this bon mot Bell played the tune crystal clear at the highest point of the violin’s range. One slight mistake would crash the whole enterprise like… well… like the recent debacle on Wall Street. Bell, with a technical precision that borders on immaculate, didn’t slip a micro-millimeter and the entire effect was magical.

The second half of the program was devoted to one of Bruckner’s great symphonic works, and the Oregon Symphony delved into its intense emotional content with verve and veracity. Bruckner was one of the finest organists that the world has ever known, and his symphonic music treats the instrumentalists of the orchestra as if they were his keyboard, stops, pedals, and bellows. With Kalmar leading the way, the orchestra built tower upon tower of sound and the entire result was magnificent. The superimposed themes and the complex chromaticism were achingly beautiful. Also impressive was when the massive sonic thrust suddenly stopped and all that was left was a flute piping away (kudos to principal flutist David Buck). The four Wagner tubas were terrific also. Their mournful cry in the second movement was moving. The brass, woodwinds, and string sections all had moments of glory. All of the principals played extremely well. The orchestra made great music. If there are any tickets left for the remaining performances of this piece (I understand that the concert is Salem on Tuesday evening is completely sold out) then please get a ticket and hear a masterwork played at its best.

As some of you may know, Bruckner was buried below his favorite organ at the St. Florian monastery church in St. Florian, Austria. I found this photo on the web: 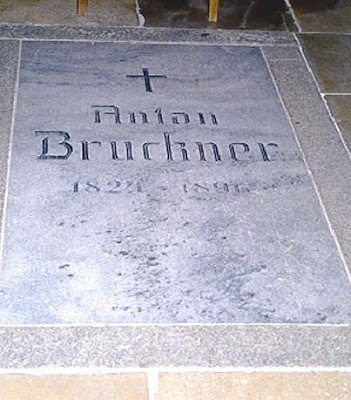