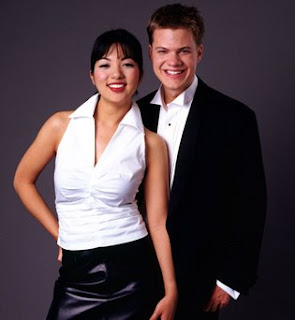 If you ever have the pleasure of attending a Greg Anderson and Elizabeth Joy Roe concert, be sure to sit on stage. That’s where I took a seat during Sunday afternoon’s concert at the World Forestry Center where Anderson and Roe held forth just few feet away from me. They gave an electrifying performance that swept the audience into a cheering mass of humanity, making a strong case that playing piano is the most fun thing that two people could ever do together.

I got to share the stage (so to speak) with Anderson and Roe, because the concert was sold out, and they told the presenters, Portland Piano International, that they actually like some audience members on stage. The few of us who took up their offer were rewarded with a close-up view of two piano virtuosos who were totally in sync with each other. From the first piece of the recital, an Anderson & Roe arrangement of Saint-Saëns “Dance macabre,” to the last, an Anderson & Roe ragtimey arrangement of Mozart’s “Rondo alla turca,” the two pianists played as if they were one person. Whether they were racing up and down the keyboard pell mell, lingering with dreaminess over a slow passage, or executing precise cutoffs, they were always together artistically and technically, and the overall effect was astounding and a total pleasure to hear.

For most of the pieces, Anderson and Roe played opposite each other on Steinway grands, and once in a while I could hear one of them use a sharp intake of breath as a signal to start after they had reached a dramatic pause or break in the piece that they were playing. But for the most part they seemed to rely on some kind of innate and artistic sense to determine when they would play and when they would release notes at the end of a particular passage or movement. It was quite stunning to witness them do this several times as they played Stravinsky’s “Rite of Spring.” By using two pianos, Anderson and Roe could traverse the full range of this technically demanding piece, and they really threw themselves into it with a wild abandonment that could’ve easily gone way out of bounds in the hands of lesser artists.

Impressive also was Anderson and Roe’s delicately shaped passages and seamless playing in their arrangements of “The Swan” from Saint-Saën’s “Carnival of the Animals” and “Erbarme Dich” from Bach’s “St. Matthew Passion” (BWV 244). They also had a rollicking great time with their intense arrangement of Radiohead’s “Paranoid Android,” giving it a smashing ending.

With their four-hands on one piano interpretation of “Vocalise” from Rachmaninoff’s “Fourteen Songs” (Op. 34, No. 14), Anderson and Roe redefined the sense of intimacy on the piano bench. It was a superbly choreographed work in which she cozied up to him, his arms were briefly around her shoulders, her hands were underneath his, his underneath hers, their hands were crisscrossing, and at it looked like they were playing footsie at the pedals.

The thunderous ovation at the end of the concert brought Anderson and Roe back on stage for two encores. The first was their sensual arrangement of Piazzolla’s “Libertango” and the second was a scintillating, glissando-ing rendition of Khachaturian’s “Sabre Dance.”

Judging from the crowds of young people who were asking for their autographs after the concert, there will certainly be some attempts by their new fans to follow in their footsteps. But it also makes me wonder why so few pianists have tried to capture the public’s imagination in a similar way. Katia and Marielle Labèque are perhaps the most prominent duo in North America, but few other names come readily to mind. I don’t know how much literature has been published for piano duos, but the amount doesn’t seem to matter to Anderson and Roe because they are writing their own new pieces.

In any case, I hope that Anderson and Roe return to Portland soon, and I’ll be ready to sit on stage with them again.
Posted by James Bash at 4:39 PM

I recently came across your blog and have been reading along. I thought I would leave my first comment. I dont know what to say except that I have enjoyed reading. Nice blog. I will keep visiting this blog very often.