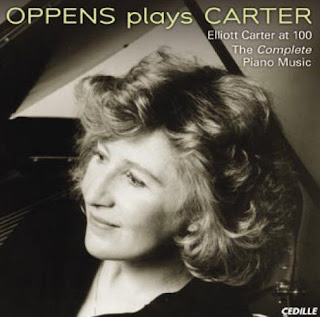 Ursula Oppens is a magnificent pianist who has conquered the numerous challenges of contemporary composers. Oppens has built a terrific reputation with her incisive playing of works by Anthony Braxton, John Harbison, György Ligeti, Witold Lutoslawski, Conlon Nancarrow, Frederic Rzewski, Joan Tower, Charles Wuorinen, and many other composers. Last year, Cedille Records released an album, "Oppens Plays Carter," in which Oppens performed all of the piano works of Elliott Carter, and her talent at the keyboard is unquestionably brilliant.

Yet the music of Carter remains a mystery to this reviewer. The sporadic and unconnected quality of each piece in this recording just doesn't resonate with me. Perhaps if one of the pieces had even the tiniest snippet of lyricism or harmony, then I would be able to relax my ears and enjoy the unrelenting, scattershot of notes that dominates each work. After thirty minutes, the spiky quality of Carter's music becomes tiresome. When I look at a picture of Carter, who was born in 1908 and is still composing new works, I see someone who looks like a benign grandpa, but his music is not avuncular at all. Oppens's scintillating playing of Carter's music deserves the highest praise. I'll try listening to the album again at a later date and see if I can warm up to it.
Posted by James Bash at 9:08 PM

It ia a matter of fairness, not to say professional responsibility, not to make assertions about music with which you are not familiar that may be discouraging to potential listeners.

Those who know and love Carter's music, and there are many, hear it as passionate and lyrical, even if it does not sound like Brahms.

Please make an effort to acquaint yourself with the music before making assertions that are damaging to a composer's reputation.

I've listened to this Carter album several times in an attempt to get into it. And I've also listened to a lot of new music - much of which I have enjoyed.

It is not the responsibility of a reviewer to pretend to like something they don't enjoy, whether it's the composition or the actual performance.

The shepherding of a composer's reputation is also certainly not the responsibility of a reviewer; it's up to the composer (and his agents/publicists) to take care of that!

This is simply a terrific recording of some wonderful music. Miss Oppens and Mr. Carter are to be complimented.

i know and respect a good deal of carter's music. sadly, none of it moves or appeals to me. i've come back to it many times over the years in an effort to attempt to find out if i'm "missing something." perhaps i am but life is too short to allow carter to waste any more of my time.

i have a VERY funny story that robert mann told an old friend about the juilliard sq playing carter's 2nd sq at a funeral. i think i already posted it on charles noble's blog. shall i post it here?

james, i suggest you drop the carter and move on. additionally, don't worry about all the claims that he's a "great composer, " he really isn't, in my opinion, of course.

Somehow Bob's post was repeated; so I just deleted it.

Actually, I wrote a positive review of some Carter pieces for Asymmetry Music Magazine here:
http://asymmetrymusicmagazine.com/events/tashi-performs-carter-and-messiaen/

So, I'm not negative about all of Carter's music.

Now I really want to hear this CD...