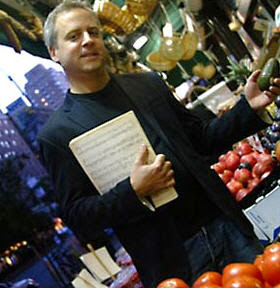 Jeremy Denk gave the concert of a lifetime on Saturday evening (July 18) as part of the recital series offered at the World Forestry Center as part of the Portland Piano International Summer Festival. This was a one of those rare performances that made this listener feel more alive, more aware, and more appreciative of everything in the world. And Denk accomplished this with a very demanding program (that he changed earlier in the week) that consisted of Ives’s Sonata No. and Bach “Goldberg Variations” (BWV 988).

Very few seats were still available when Denk came on stage and introduced the Ives’ Sonata with brief, yet incisive information about the themes in the piece. According to Denk, who picked up a score in the bargain rack a music store, this five-movement work loosely tells how a Connecticut farming family and its wayward son. Ives uses hymns like “I was a Wandering Sheep” and “What a Friend We Have in Jesus” to refer to mindset of the mother whose son had left the farm and embarked on his own pilgrimage, which apparently landed him in a dissipated state at a ragtime roadhouse.

I found Denk’s introduction to be very helpful in following the convolutions of Ives’ music. But even without the verbal program notes, it was easy to appreciate Denk’s evocative playing. He expressed turmoil, wistfulness, wildness, struggle, anguish, and a brief sense of enchantment. The explosive changes in mood – from aimless meanderings to violent turbulence – riveted the audience and built up the swirl of the story.

After intermission, Denk delivered a rapturous performance of Bach’s “Goldberg Variations,” one of the pinnacles of the piano repertoire. In Denk’s hands, each of the 30 variations of this piece created a jewel-like impression. Denk displayed terrific control and imagination as his traversed the soundscape of this work. His pianissimos whispered. His fortes sprang to attention. He made the music sing and, at times, speak to us with crisp diction. He easily made the music sound introverted and at other times extroverted. All in all, Denk brought the entire scope of Bach’s music to us in a way that elevated the senses.

I don’t know when Denk will return to Portland for his next concert, but I hope that we won’t have to wait too long. In the meantime, he is playing at the Seattle Chamber Music Festival from July 24 through July 31.
Posted by James Bash at 10:48 PM