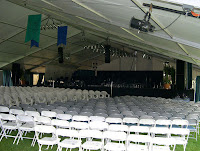 As a member of the Portland Symphonic Choir, I sang several times at the Cascade Music Festival in Bend, Oregon. That festival, which went out of business last year, used a huge tent for its performances, and I once asked the festival's leaders where they got that tent. They told me that it was Michael Jackson's prep tent at the 1993 Super Bowl. This is a huge tent that can seat several hundred people and include a stage for an orchestra. I wonder where it is now.
Posted by James Bash at 10:32 AM

yup, most of us dine on Michael's leftovers. such is the nature of our world.