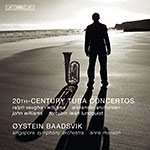 BIS Records recently released a compilation of tuba concerti by various 20th century composers featuring tuba specialist Øystein Baadsvik, soloist, with the Singapore Symphony Orchestra under the direction of Anne Manson. Featuring works by Vaughan Williams, Alexander Arutiunian, John Williams and Torbjörn Iwan Lundquist, this disc is an exposition of the oft-overlooked versatility of this instrument.

The opening piece by Vaughan Williams, Concerto for Bass Tuba (1954) begins the showcase of Baadsvik’s agile mastery of his instrument. The Prelude is a tasty, grumbling discourse from the soloist, while in the gloriously singing Romanza, Baadsvik takes the reins and runs, describing a sonorous ballet like the dance of a whale—ponderous, slow, alien, and yet singular and undeniably beautiful when in its proper element.

Arutiunian’s work, Concerto for Tuba and Orchestra (1992) is very folkish and spritely—an unusual descriptor for tuba music to say the least. The melodies are originals by the composer yet have the distinct flavor of Eastern European/Near Middle Eastern folk tunes. Lundquist’s moody Landscape for Tuba, String Orchestra and Piano was said by the composer himself to be a direct refutation of the notion that the tuba could not play expressively or cantabile, and it certainly succeeded in that respect. Exciting glissandi like the trumpeting of an elephant and rapid, fiery cadenzas break up the somber, rocky landscape of the composer’s imagination.

John Williams’ Concerto for Tuba and Orchestra (1985) closes out the disc, and is in some ways the most integral work in terms of the solo instrument being a part of the whole rather than the sole reason for its existence. Baadsvik makes good use of the varied textural template, which ranges from moments reminiscent of Williams familiar, scintillating film scores to starkly percussive, idiomatic segments.

In a release that was perhaps meant to disprove our cultural concept of the tuba as either belonging solely to the accompaniment or evoking a comical (perhaps occasionally sinister) mood when a solo instrument, one has to ask--did the release achieve its goal? Baadsvik is purportedly the only tubist in the world to have pursued a career expressly as a solo performer, without having played in an orchestra or accepted a teaching post. Chances are, whatever range of expression his instrument has to offer, Baadsvik has found it.

At first it is difficult to stop hoping for the tuba to break forth with a clearer, more piercing tone—a tone that, given its relative absence on a release by the tuba's foremost exponent and meant to highlight its versatility, the instrument probably doesn’t possess. This isn’t, after all, a collection of horn or trumpet concerti. In certain moments of the Lundquist, Baadsvik comes close to achieving this, playing with a timbral tightness that eliminates much of the muted ‘fuzziness’ around the edges. Still, if one stops wishing for something the instrument can’t easily provide, and instead enjoys the rich palate of sound that it does possess, the release achieves its goal admirably, as well as presents some uncommonly heard and quite beautiful music.
Posted by Lorin Wilkerson at 4:46 PM